According to AccuWeather.com’s Chief Meteorologist Joe Bastardi next winter could be the coldest and snowiest in more than five years for the Northeast, the traditional stomping grounds for WinterCampers.com

According to  Joe Bastardi, cooler-than-normal weather this summer in the Northeast could point to a cold, snowy winter for the Northeast and mid-Atlantic states. 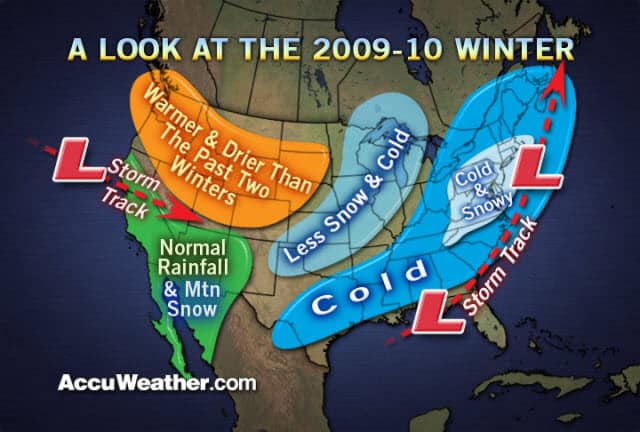 “In years past, cooler summers have been followed by harsh winters,” Bastardi said.  The Great Lakes and Northeast have been experiencing the coolest summer in more than a decade and, after a period of more classic summer heat in coming weeks, cooler weather is expected to continue the trend of the “Year Without True Summer.”  Temperatures in New York City did not top 85 degrees in June this year. There have only been three other times in recorded history when New York City failed to reach 85 in June. In each of those instances, snowy winters followed.  “Chicago had 12 days in June when temperatures did not exceed 70 degrees. This has happened only one other time — in 1969. That year was followed by a snowy winter as well,” he said.

Bastardi predicts the current El Niño will fade over the winter and will probably not play as much of a role in the overall weather pattern as one would think during a typical El Niño year. The areas that will be hit hardest this winter by cold, snowy weather will be from New England through the Appalachians and mid-Atlantic, including North Carolina. Areas from New York City to Raleigh have gotten by the past two years with very little snowfall. This year these areas could end up with above-normal snowfall.

The storm track that could develop this year will bring storms up the Eastern Seaboard. This type of storm track will differ from that of the past two years, when storms tended to take a track farther west from Texas into the Great Lakes. That track into the Great Lakes brought unseasonably mild weather along the East Coast,  on the more rainy side of the storms. The track this year right along the Eastern Seaboard is on the cold, wintry side of the storms.

Elsewhere the Midwest and central Plains, which have been hit hard the past two winters, may have below-normal snowfall and could even average a bit milder than past years.  A warm and somewhat dry weather pattern is expected from the Pacific Northwest into the northern Plains. The typical barrage of winter storms that hit Seattle and Portland may not occur this winter and lead to below-normal precipitation.