I am attended an Outdoor Skills Workshop sponsored by ADK 46-ers at the Adirondak Loj in Lake Placid.   It was an intensive weekend workshop designed to train individuals involved in leading groups (e.g. Camp counselors, Y-leaders, scout leaders, 4-H leaders, recreation personnel, teachers) on wilderness camping trips.   Topics covered included:  Pre-trip planning and safety; food planning and packaging; campsite organization and safety; meal preparation and safe use of stoves;  map and compass; group leadership;  wilderness emergencies and how to respond to them; appreciation of the Adirondack environment; geologic history of the region; evaluation of proper clothing and equipment; cooking/baking in the out-of-doors; leave no trace; camp leadership training; establishing a campsite; nature, folklore and history of the Adirondacks.

We began the weekend on Friday evening by organizing the 50+ participants into cooking groups (1-6) and performing six socialization games.

Each of these exercises emphasized  communication, group role definition and team work.

Friday evening concluded with a humorous talk from retired DEC Ranger Peter Fish who regaled with stories of rescues and reviewed the items in his day pack.  We finished at 10:30pm and retired to lean-tos and tents.

Saturday morning we met for breakfast at 7am and began our program at 8:30.

Introduction to Trip Planning and Route Finding.  Frankly this session was painful.  It was a long lecture.  It was drizzling and cold. At the end the speaker stated that lectures were the worse way to transfer information.  We broke into small groups and I participated in a Map and Compass group exercise.

We climbed nearby Mount Jo where we heard discussions of on Wilderness Emergencies, Geology of the Adirondacks, and the Adirondack Environment.  After descending Mount Jo we witnessed a base camp cooking demonstration using reflector ovens, dutch ovens and the stove top Backpackers Oven.  We cooked our own dinners and then rejoined to hear sessions on food planning and preparation, Leave No Trace, and a High Peaks Slide Show.

Sunday we again met at 7am for breakfast.  Our morning sessions included: Adirondack Flora, Folklore of the Adirondacks (Noah John Roundeau), more Map & Compass, Equipment Evaluation put on by two EMS employees, Organizing an Outing Club, and Adirondack Routes and Trip Planning.  I was able to attend the three sessions in bold text.   Finally there was a short demonstration on hanging a bear bag.

We finished at noon and completed course evaluation sheets, had lunch and then received our t-shirts and diplomas. A large group and individual cooking group pictures were taken. 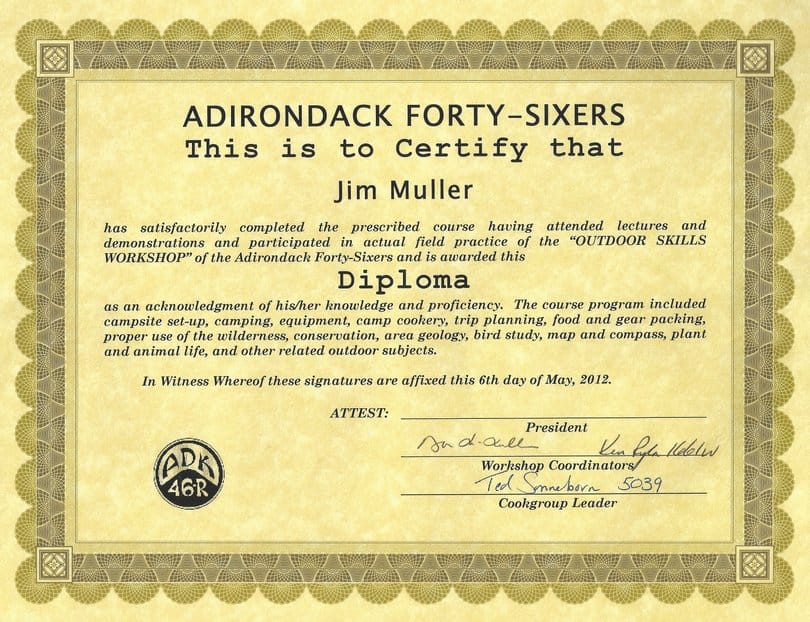 I was surprised that 1/3 of the participants were retired.  There were lots of boy scout leaders. The course covered a lot of material, albeit at a high level.

The Adirondack Forty-Sixers are a non-profit organization of those who have climbed the 46 major peaks of the Adirondacks. They provided workshop as a public service to all who are interested in utilizing the Adirondacks properly.  Well worth taking.