September 15th celebrates Woodsy Owl’s 42nd birthday. Woodsy has been the U.S. Department of Agriculture and the U.S. Forest Service symbol for conservation since 1971 when his campaign encouraged citizens to, “Give a Hoot, Don’t Pollute” both in the city and in the woods.

Woodsy’s trademark utterance was first used in a student film Chuck Williams made in 1970 for an evening cinematography class he was taking while working on the Lassie show. The film, an antipollution public service announcement, featured scenes of litter and pollution and ended with an image of a real owl sitting in a tree while in the voice-over Chuck recited the lines, “Are you concerned about your environment? Then do something about it. Give a hoot, don’t pollute.” Woodsy’s alpine hat was inspired by a promotional item Williams had picked up for his daughter while on location for Lassie.  The owl caricature won out over elk, trout and raccoon images.

It’s tough being Woodsy Owl.  He had to compete with Johnny Horizon and the Crying Indian to become an iconic symbol.  These days Woodsy is a slimmed down, healthy looking bird whose message is “Lend a Hand – Care for the Land.” You can read about the history of Woodsy Owl here. 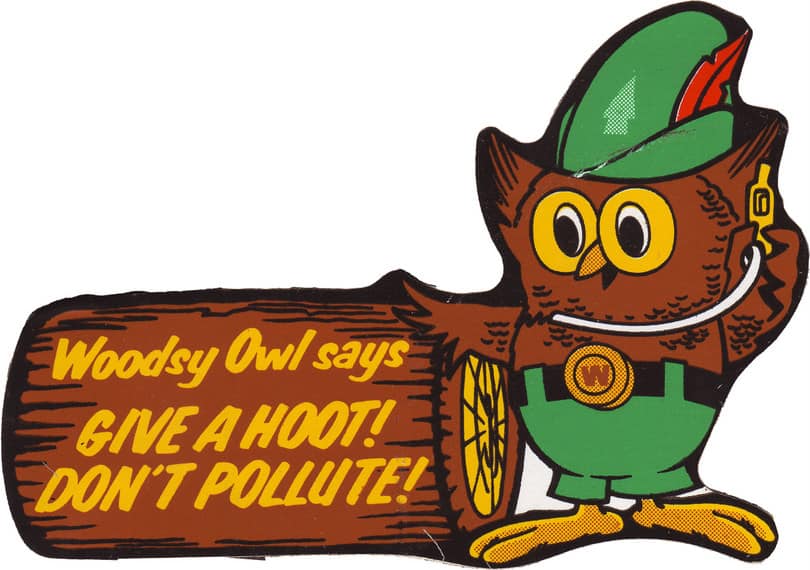