Ely, Minnesota  Feb 16th-20th.  After much research by Matt, the Founders…Uncle Jim, Matt and Mark were joined by Jason, Kathryn and Paul for a dog sledding trip in Ely, Minnesota. Matt selected WinterGreen Dogsledding because they seemed most willing to allow us to participate in working with the dogs and camping independently.  The group arrived in Ely, MN after a very long drive and settled into the Wintergreen lodge Monday afternoon.  We played tourist in Ely until it was time to meet up at Paul Schurke’s WinterGreen Lodge for our trip preparations.

We were apprehensive about the weather for our trip as it was -30f degree overnight Sunday and only warmed up to single digits during the day. After dinner Monday night we met our two guides, Rob and Steve.  We laid out all our gear for inspection, planned our route and practiced harnessing a quiet and compliant husky.

Clockwise from the upper left below: flags in Ely;  Jim practices harnessing with Kathryn on-looking; Paul, Jim, Matt and Jason on the streets in Ely;  Jim, Jason, Paul, Kathryn and Mark at dinner; Matt & Jim try to strap the tailgate onto Matt’s truck in -30s morning;  Jim and Kathryn display their gear for inspection; and planning our route. 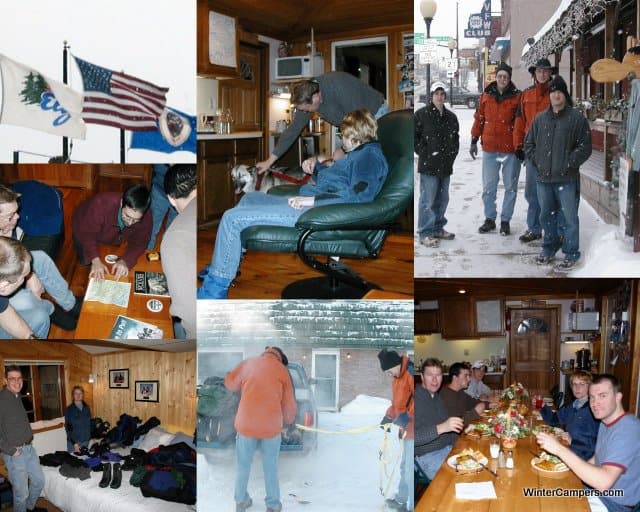 We awoke Tuesday morning bright and early to feed the 57 Canadian Inuit Dogs – a frantic, loud and semi-chaotic scene for those of us feeding for the 1st time.

All our gear went into  large duffel bags , the sleeping bags were stowed inside a bivvy bag and laid flat on another sled.  We ate breakfast in the lodge and  got some last minute instructions from Paul Schurke.

Hooking up the dogs was a matter of locating leaders, swing and wheel dogs and determining compatibility between the pairs.  The initial rush of the dog teams from the yard through the woods to the lake was accomplished by the guides and once on the lake the teams were turned over.

From the upper left below: Jim is pumped to go; Kathryn holds her leaders; declaring their alpha status; the sled staging area; a dog chained to their dog house; Jim and Kathryn with their loaded sled; and Schruke’s dog yard. 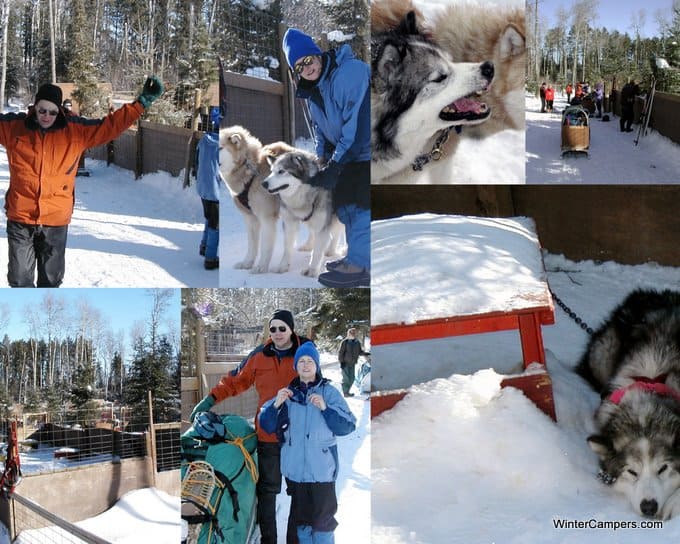 Two of the sleds were pulled by 6 dogs and the other smaller sled was pulled by five.  Steve and Rob wore XC skis and skied the entire time with a map always in hand- one as lead and one usually as sweep.

The dogs that Wintergreen uses are Canadian Inuit Dogs.   They have a kennel of about 57 dogs….no 65 as 8 puppies were born while we were there.  In contrast to the racing huskies commonly seen in the Yukon Quest or Iditarod these dogs are ‘freighters’.  Each dog weighs about 80lbs and can pull at least twice their weight in payload for hours on end at a steady trot of 6-8mph.

Once on the move though these dogs are all business and just love to pull.  They seem to have a one track mind….”Pull, Pull, Pull….” then when we would reach a hill or get stuck it was…”Pull Harder, Pull Harder…”  You actually feel bad to stop them and take a break as they just want to keep going and get very anxious when we did stop. They follow a few simple commands.  To launch the sled you would first give the command “Ready” which would get all the dogs up…then “Hike” and the dogs were off.  “Whoa” to slow and stop the team, “Gee” to turn right and “Haw” to turn left. 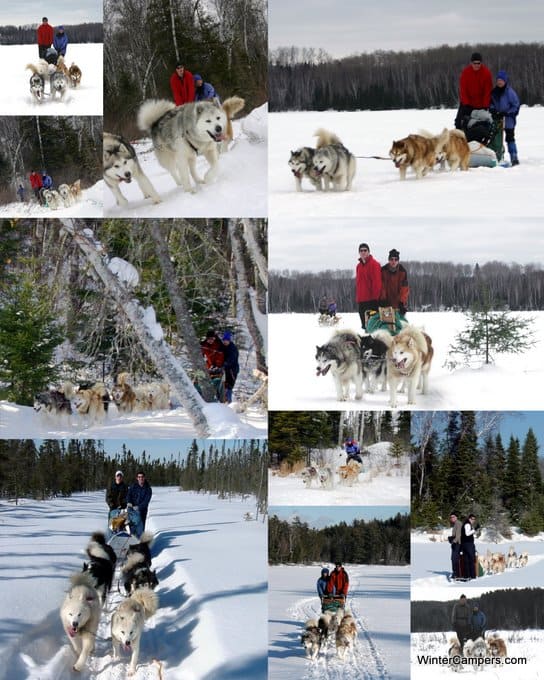 Mushing was not just riding on the back of the sled and shouting out commands however and proved to be very challenging.   It takes a lot of strength and balance to not only balance on the back of the sled but also to shift your weight and help steer the sled around turns, trees etc.  When climbing hills you had to get off and help push the sled up the hill and if you didn’t the dogs would all stop, turn around and look at you as if to say “What the heck?!”   The same was also true when going through deep snow, slush, over logs etc.  The dogs depended on us almost as much as we depended on them.

We also had our fair share of collisions with trees and falling off the sleds.  I believe everyone fell off at least once and some much more than that.  Once you fell off of the sled…or performed a controlled dismount….you were very motivated to get back on the sled….first so that you don’t have a run away sled and secondly since usually you had a team of dogs hot on your heels ready to run you over if you did not get out of the path!  We had one memorable incident when Jason fell off his sled and was nearly run over by the next sled driven by Jim & Mark.   Although they were standing on the brake (and laughing) the sled chased Jason for nearly 100 yards as he sprinted to re-gain his sled.

We had several very close calls and a couple of major collisions due to the terrain and the “staff only” or “double black diamond” trials that we went on. 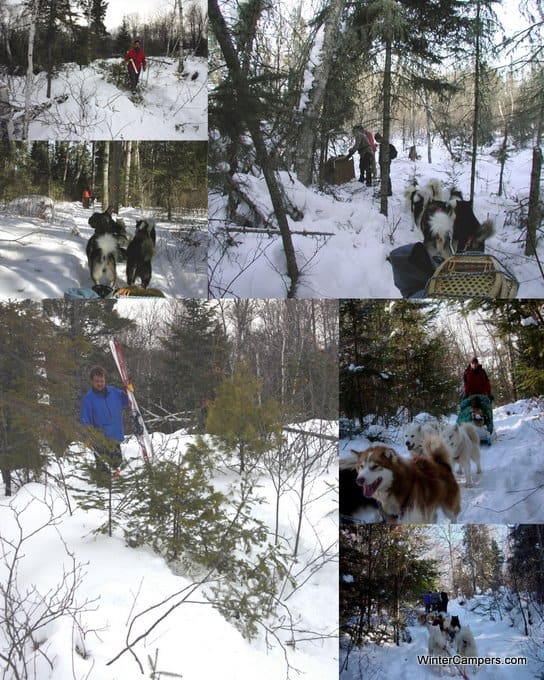 All in all we covered 24 miles on the trip. The weather on the trip was nearly perfect for the humans on the trip.  30 degrees and perfect blue sky most of the time until our final day when it was a bit breezy and overcast.  The dogs were a little warm as they prefer single digit type temps but it was great for us.  The Minnesota landscape was beautiful as well….they don’t call it the “Land of a Thousand Lakes” for nothing! 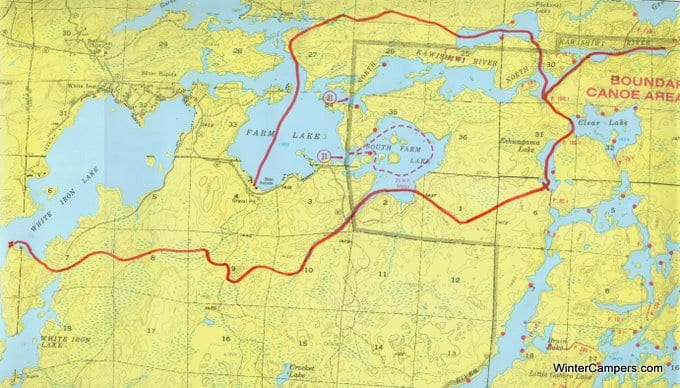 Matt, Mark, Jim and Kathryn slept in the Tipi while  Jason and Paul built a quinzee  for night one then slept out under the stars with the guides the next night after Paul got a little claustrophobic.  From the upper left below:  Kathryn ponders the morning; Jim shares space with the wood pile; Kathryn and Matt set up the Kirafu Tipi; Jim awakes on the woodpile; Mark stuffs his gear; Jason checks out his quinzee; Matt and Mark awakening; Jason getting dressed outside the quinzee; the quinzee and tipi camp on Eskwagama Lake; sleds and dogs parked at camp in the afternoon; and Jason looking out of the quinzee (center). 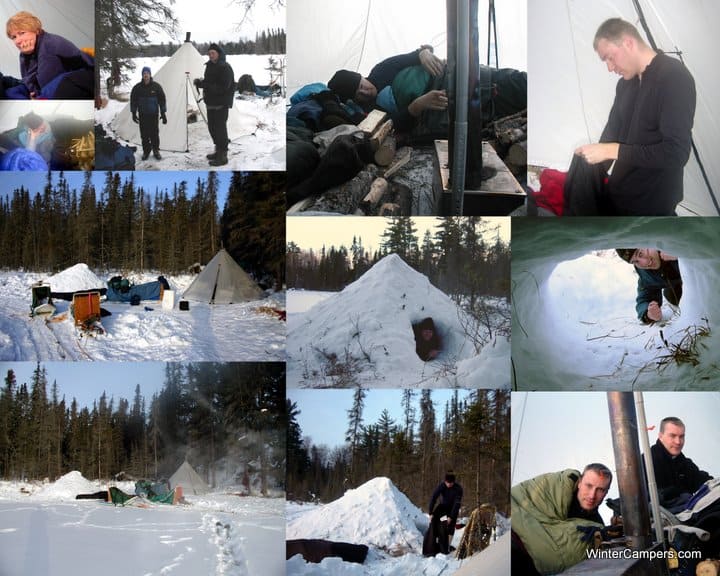 Sitting around the campfire one night we heard a pack of wolves out in the distance.  The howling wolves were quickly drowned out by the chorus of our dogs joining in.

Our guides Rob and Steve were taking their first trip in a very long time which actually made it a lot of fun as it was something new for them just as it was for us.  Although we did not always end up on the trail that we thought we would they still did an excellent job.  “Hey Rob…where are we?”  “Right here!” 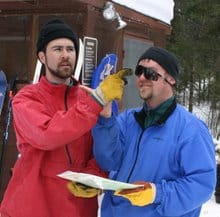 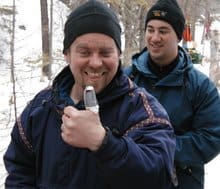 Being that some of us were former tour guides ourselves at a tourist attraction we can definitely appreciate the work that they do.  They were extremely helpful and a lot of fun.

The dogs were fed a high energy powder food mixed with a bit of water each morning and a chunk of lard each night but never seemed hungry or ran out of energy.  For water the dogs eat snow so you would see the dogs grabbing bites of snow as they plodded their way along the trail. 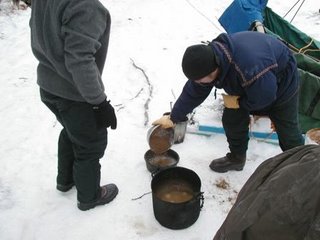 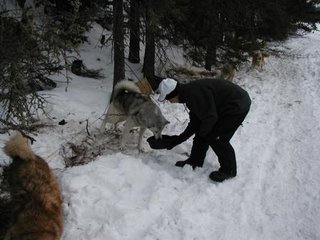 Although the dogs exhibit a pack like mentality amongst themselves they love people and were extremely affectionate.  They each had a very distinct personality and did not take us long at all to learn all their names. 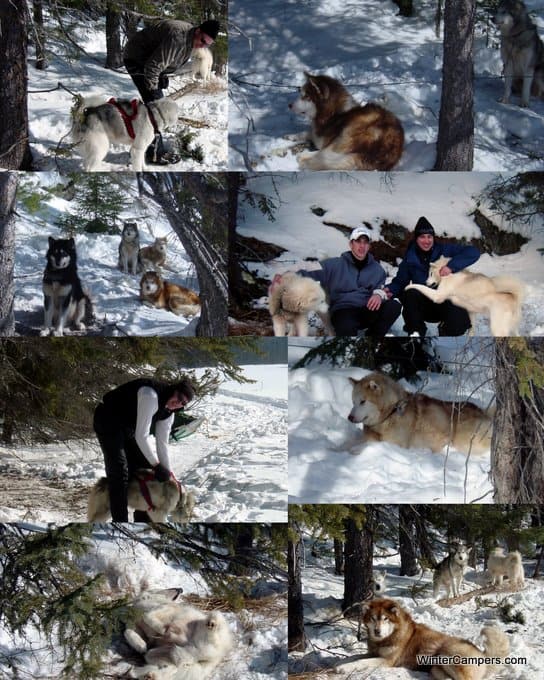 The food was cooked over fires (necessitating a fair amount of wood) and we had a lot of it.   Breakfast was eggs, sausage and bagels cooked in sausage grease…sounds tasty eh?:)  Lunch was trail mix type things, energy bars, dried fruit etc.  Dinners were pasta based….beef-a-roo pasta one night and chicken-a-roo pasta the next along with unwrapped wraps for appetizer. One interesting little tidbit is that famed explorer Paul Schurke plans on a stick of butter per person per day!  Apparently Wintergreen has some deal worked out with Land O’Lakes Butter. Water was retrieved from a pond through a hole chopped in the ice.  It was usually best boiled and colored with tea or some drink flavor. 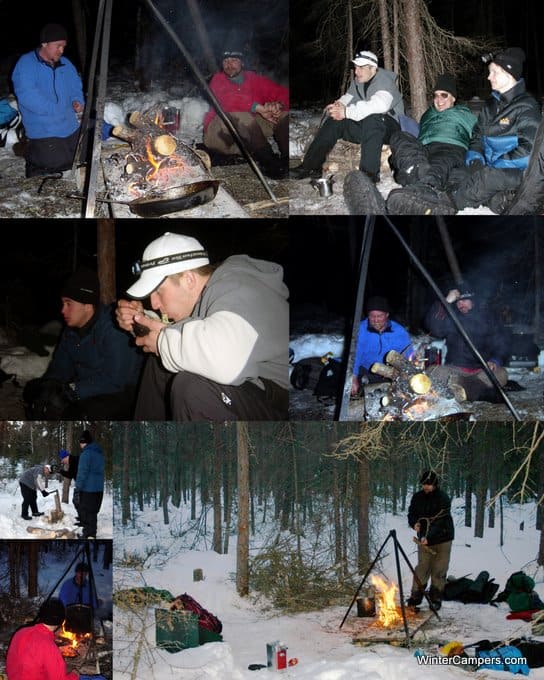 All in all it was an incredible experience and one that we would recommend to anyone.  To book your own trip or to find out more visit www.dogsledding.com and tell them you saw them on WinterCampers.com.
For more information check out these links.
•    Interview with Paul Schurke on Gorp.com
•    Mushing.com  “Never Let Go!” by Paul Schurke
•    Inuit Sled Dog Site
•    Wintergreen article in Backpacker Magazine