Matt and Solo Pete had been trying to work out a two night winter camping trip to the high peaks area of the Adirondacks but due to little to no interest from the other winter campers the plan was revised.  If not for the steadfast persistence and resolve of the aforementioned, beautiful and dramatic mountain top views would have been missed. After some discussion between Matt and Solo Pete is was decided to modify the trip to just an overnight trip, hike Noonmark instead of Lower Wolfjaw, and camp at a pond instead of an interior lean-to.  The latter part of the plan was enough to draw in Mark, who is desperately trying to become an ADK 2000-er by camping at every last water-filled depression in the 6 million acre park. 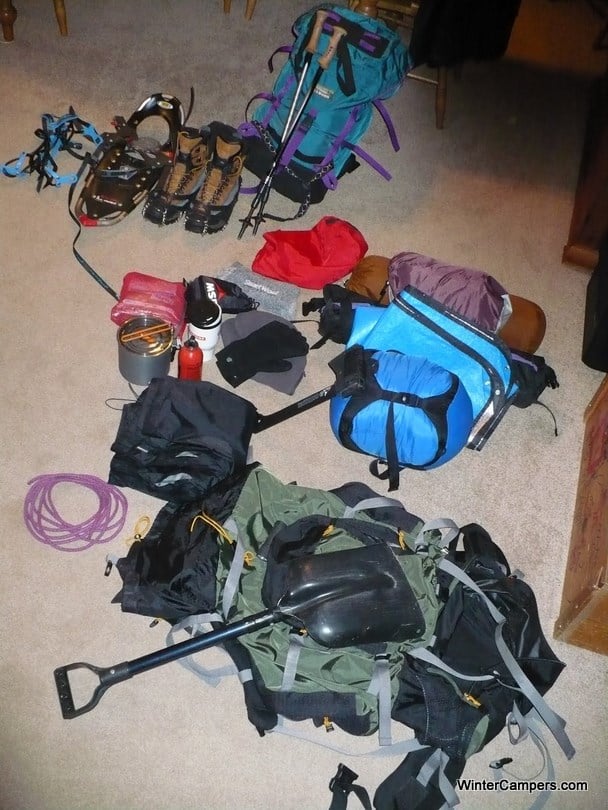 The trio met at the Rte 73 trailhead for Dix mountain at about 10:30, shouldered their packs, loaded Matt’s new sled, and hiked the half mile into Round Pond. 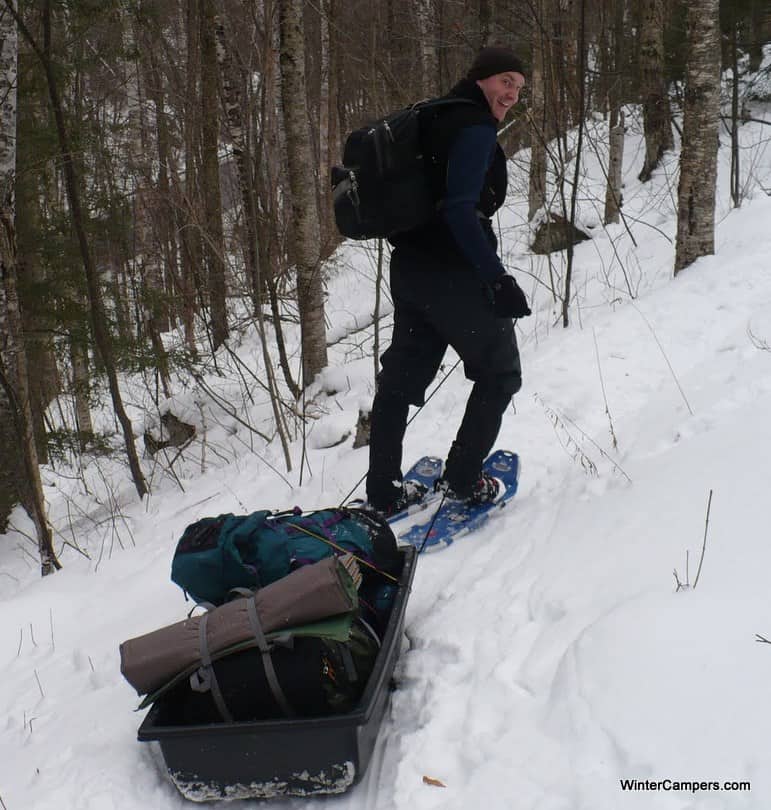 A suitable spot was selected to establish as camp for the night and the tents were set up; Mark’s to one side and Matt and Solo Pete each set their tents up within inches of each other.  After a quick lunch much debate was done on to when the attempt at a summit hike should be done. Suggestions included, go up that afternoon, hike back out, have dinner at the Noonmark Diner and attempt the summit in the morning, or just hang out at the campsite and summit the next morning.  At the time of this debate, ominously dark clouds were blanketing all the nearby mountains and it was feared that after hiking all the way to the summit no view would be had.  While the diner option always has a very strong pull, chancing it with a hike up that afternoon won. 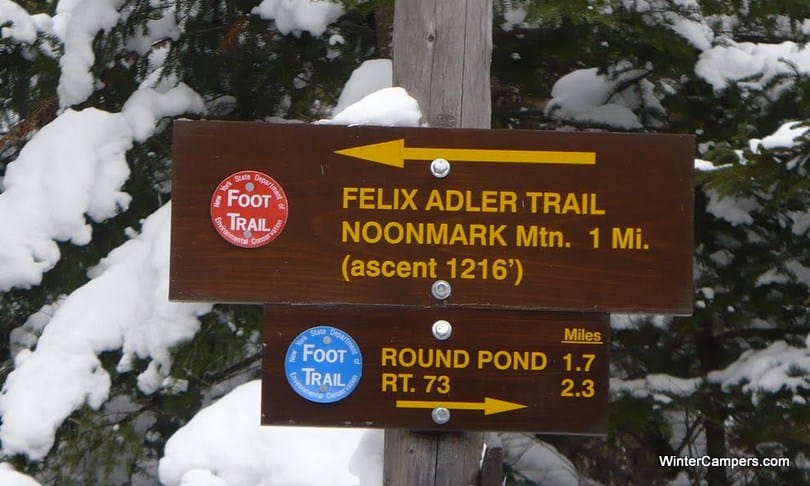 The party began the summit attempt at 12:30pm and began the steady climb and then level hike to the trail junction where the Dix trail and Noonmark trail meet.  From there is was a 1.0 mile climb to the summit.  Several areas included steep ice covered outcrops that were too slippery for just snowshoe crampons.  Due to the advanced planning of the team, they paused to change from snowshoes to crampons.  Matt, being the thoughtful and ever considerate brother, lent Mark his full feature crampons while he used his new microspike crampons.  Solo Pete also had advanced crampons.  It is worth noting at the point as well that Mark and Pete also brought along their hiking poles while Matt’s were faithfully holding up his tarp tent back at camp. It was fairly tough and slow going, due to the ice and snow, but probably also had a lot to do with the sedentary lifestyle as of late of the three hikers. 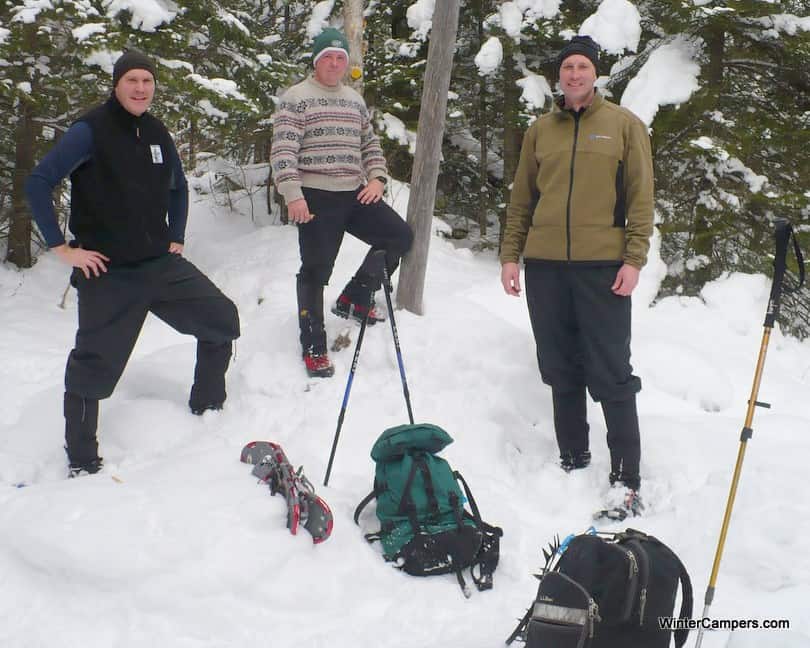 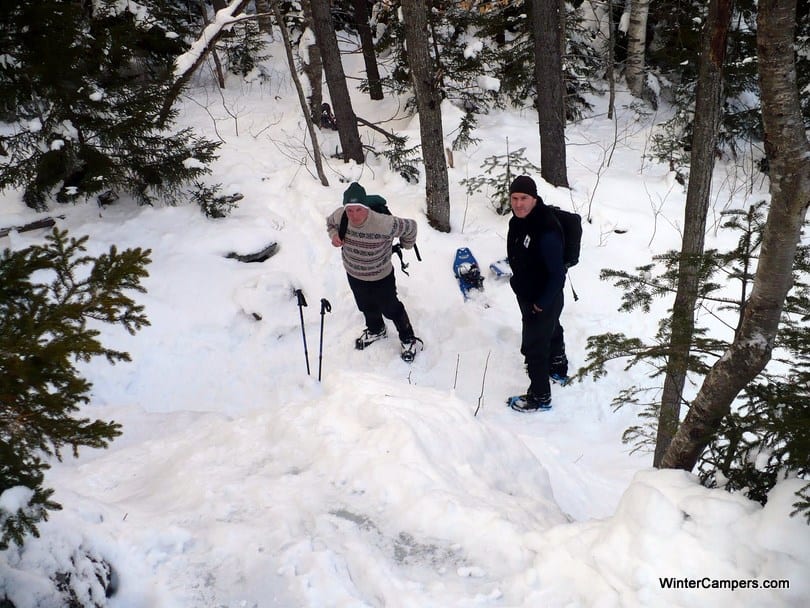 At the final pitch to the summit a rather large and steep ice slope was reached and Mark unselfishly and in the jamboree-ish of jamboree spirits tossed his hiking poles back down to Matt so that he could have 2 more points of contact on the perilous slope.  Without which, it is doubtful he would have reached the summit.

The summit views were exceptional and very dramatic.  The cloud ceiling was probably at about 4000 feet while Noonmark stands at just over 3500.  Nearby peaks could be seen rising in to the disappearing cloudy darkness while beams of sunlight stabbed through the inky darkness illuminating the horizon in places.  The winds were blowing quite heavily, the travelers were sweaty, and the sun would be setting soon so after a few pictures the crew began the descent.  It took about 2.5 hours to reach the summit and the return trip was about 1.5. 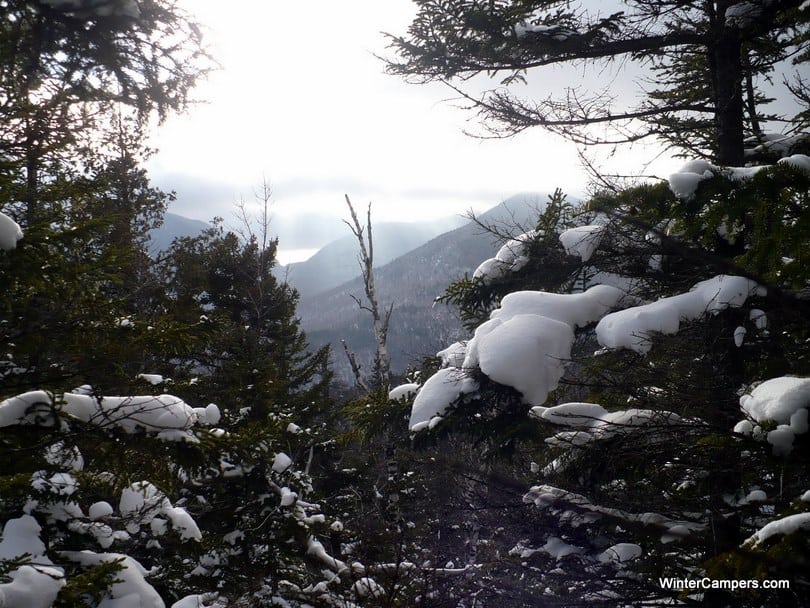 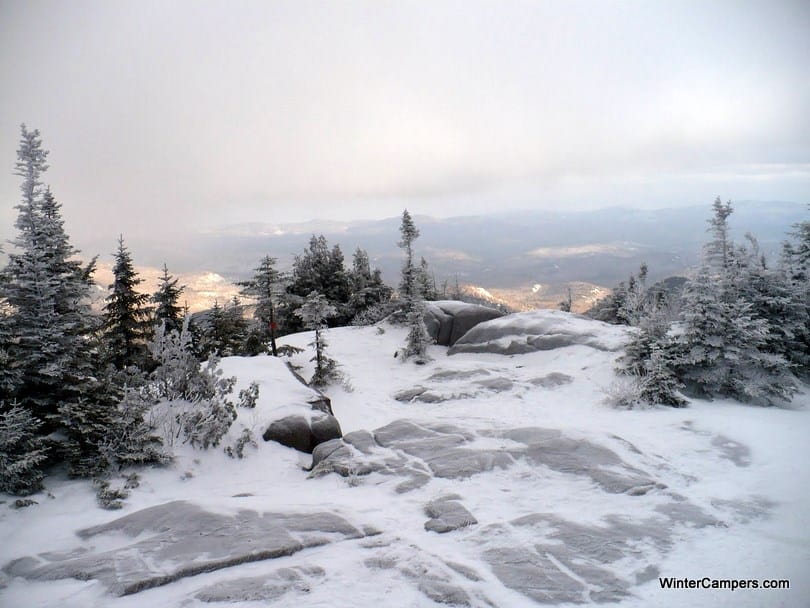 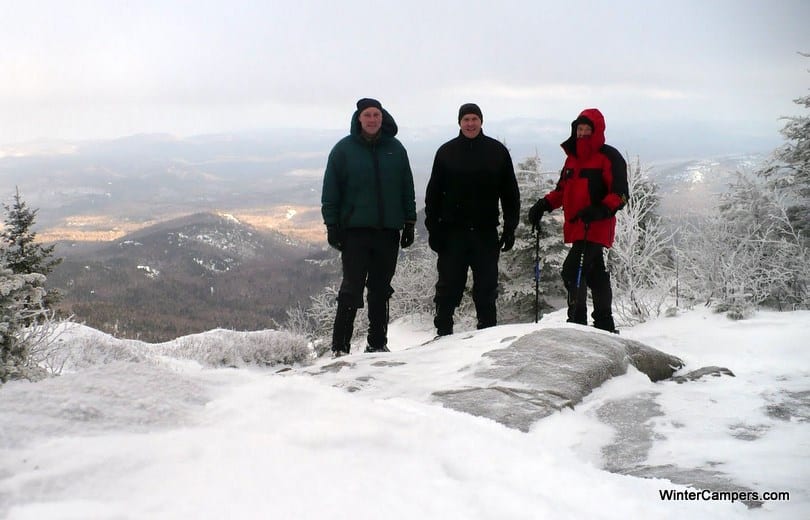 Upon returning the camp, the weary hikers dug through their packs, and crouched down like gargoyles above their little camp stoves.  Hearty warm meals were had by all and after a brief discussion of issues that can only be discussed while winter camping the trio turned into bed by 7:30pm.  Mark shared in the morning that night time lows reached about 10 degrees but all confirmed that a warm slumber was had.  Mark and Matt packed up their gear and headed out while Solo Pete, true to his name stayed a bit longer and then later hiked Hurricane Mountain while Mark and Matt headed for home.