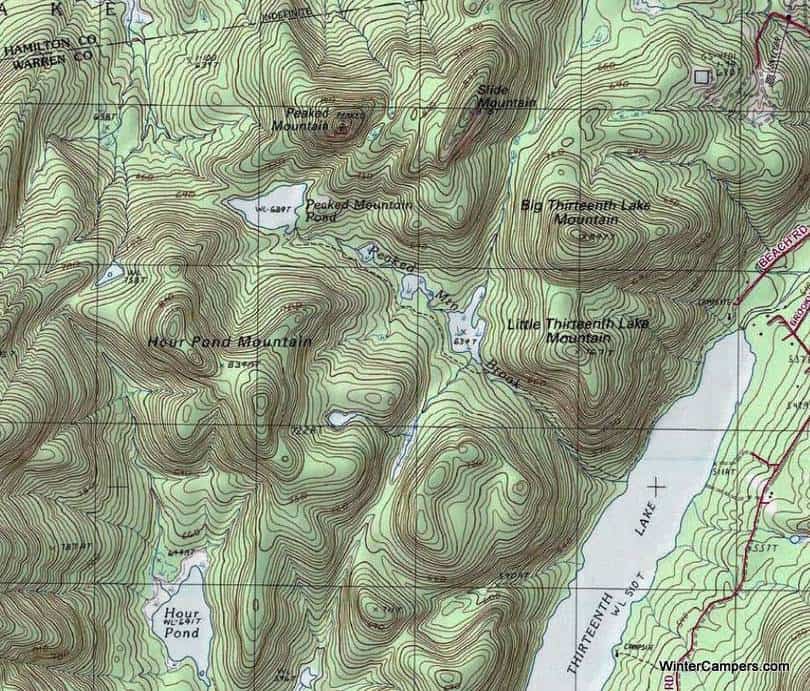 Peaked Mountain, (Latitude: N 43° 43′ 42.74″  Longitude: W 74° 08′ 58.70″) elevation 2919 feet, is a modest sized mountain located north-west of Thirteenth Lake.  It is very steep sided which affords great views of the surrounding forest, lakes, and mountains, including the high peaks.  The trailhead is at the parking lot for public access to Thirteenth Lake.  The lot is reached by taking Thirteenth Lake road off of NY route 28 north of North Creek.

In 2000 Matt, Jim and Brian followed Brian’s lead as he bushwhacked from the parking lot to the summit of Peaked Mountain on fiercely cold day and were rewarded by fantastic views.  That trip was done as a day trip over Martin Luther King Weekend.  In 2002 the  motto “Its the journey…not the destination” was born.  Matt, Jim, Mark, Len, Rob and Jason pitched their tents in the hopes of climbing Peaked Mountain but the group got a late start and were thwarted from achieving the summit of Peaked Mountain. For this venture Matt, Skip and Jim met in Speculator for breakfast and were leaving the trail head by 10:30am.  The trail head log book was full.  We followed turkey tracks on the trail that paralleled the west side of 13th Lake for .85 miles.  The sun was shining with partly cloudy skies and the lake was open water without ice. 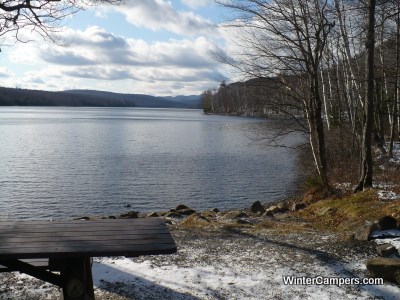 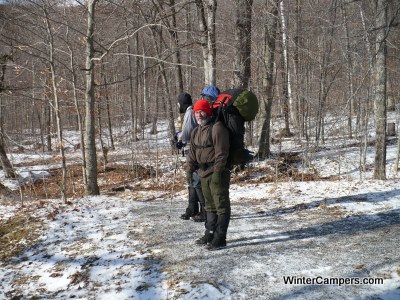 We turned northwest along the outlet of Peaked Mountain Pond.   Here the trail ascends ~600 feet for the 2.6 miles  from 13th Lake to Peaked Pond. This is a pretty walk alongside numerous cataracts and water chutes. 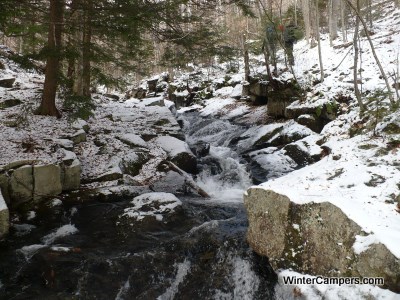 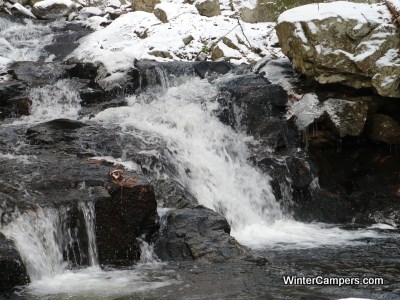 A short way into the ascent we passed the junction to Hour Pond.  The bridge across the stream provided a scenic backdrop that was irresistible for the photographers. 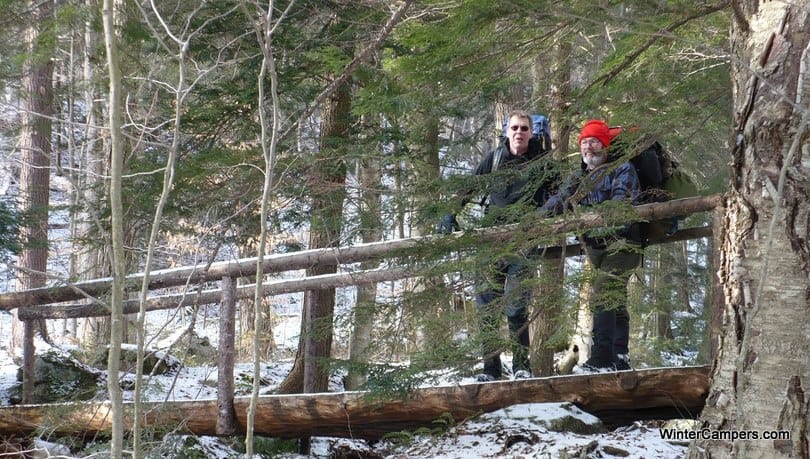 As we climbed the trail we followed canid tracks that we believe were from a fox.  As we neared Peaked Mtn Pond there were several stream crossings as we bore off to the NE skirting Peaked Pond. 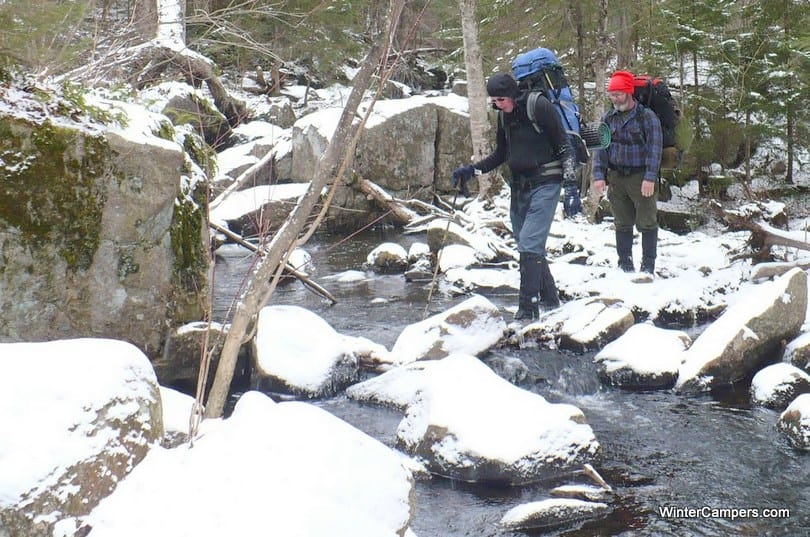 We bushwhacked around new beaver ponds that showed a lot of recent activity. 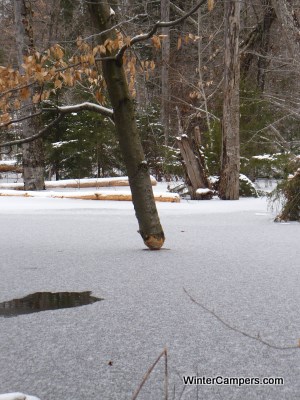 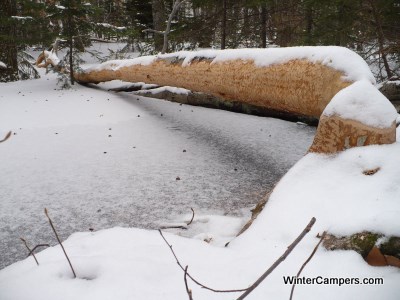 We found a suitable campsite to the NE of Peaked Mtn Pond and took a break for lunch to discuss our options.  By this time the skies had clouded up and light snow squalls flurried around us.  Since the primary purpose of climbing Peaked Mtn was to witness the view we debated the merits of continuing our hike or waiting until Sunday morning when the weather forecast called for clear sunny skies.  We finished lunch, cut wood for the evening’s fire and pitched our Black Diamond Megamid tent.

The  Megamid is supposed to sleep 4 persons, but I am sure they never made those calculations with 6’4″ campers in mind.  It  fit 3 sleeping forms quite well, especially if it can be hung from line rather than using a center pole.  For this trip I packed a piece of Tyvek building wrap that fit nicely as a ground cloth.  We set out our sleeping bags to loft.  Matt happily set out his new Marmot CWM -40 sleeping bag which he coupled with  a short Ridgerest and long Thermarest inflatable pad and a basic bivy bag.  The loft of  Jim’s  Western Mountaineering Puma paled by comparison. 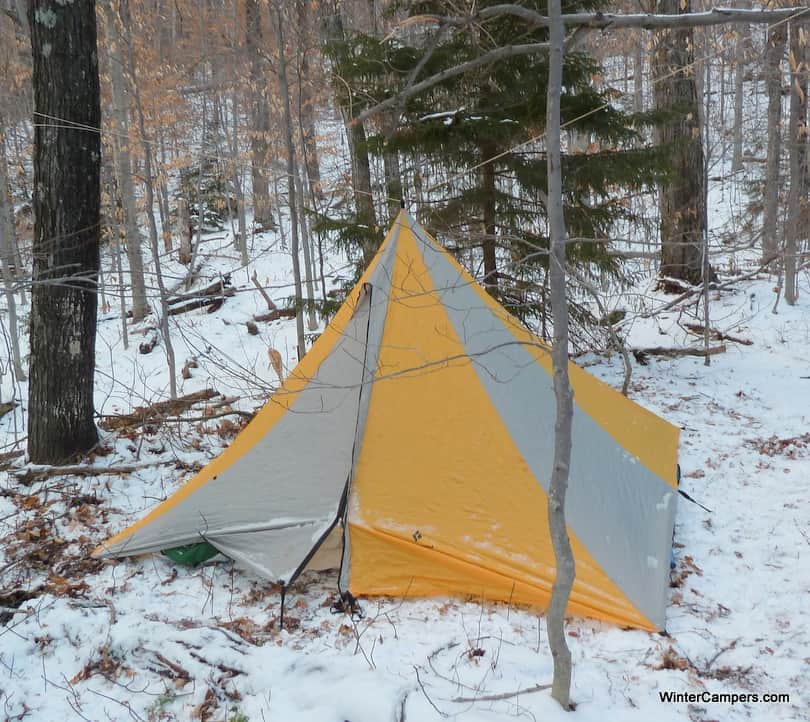 We completed our chores and we saw a few breaks in the sky.  At 1:30pm we felt it was too early to spend the rest of the day hanging around camp and made the decision to summit Peaked Mtn.  We estimated it would take roughly an hour to climb to the summit, 30 minutes of hanging around on the summit and another hour to return; giving us a small margin of error before darkness came at 4:30pm.

The bushwhack to the summit trail was steep, clogged with dead-fall and icy near the summit.  Skip used crampons, while Jim relied on his trekking pole and Matt prevailed relying on sheer athleticism. The final approach to the rocky summit worked its way around the base of the sheer cliffs.  The steep climb was challenging on the way up and precipitous on the return. We used trees and roots as hand holds to cross the particularly icy sections. 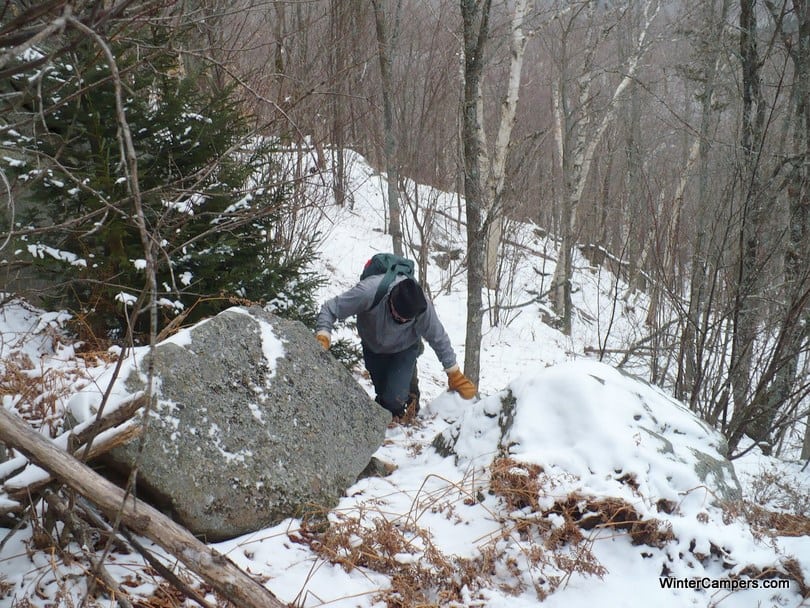 At the summit we were rewarded with a panoramic view of the southern Adirondacks and took numerous photographs, including the requisite group photo.  Similar to our trip to Peaked Mtn eleven years prior we noticed snowshoe hare tracks on the summit.  We hadn’t noticed any at lower elevations. 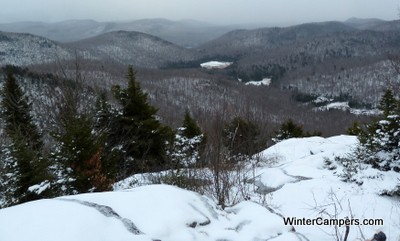 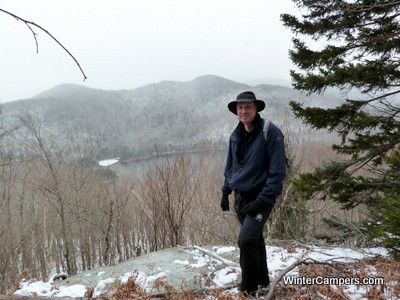 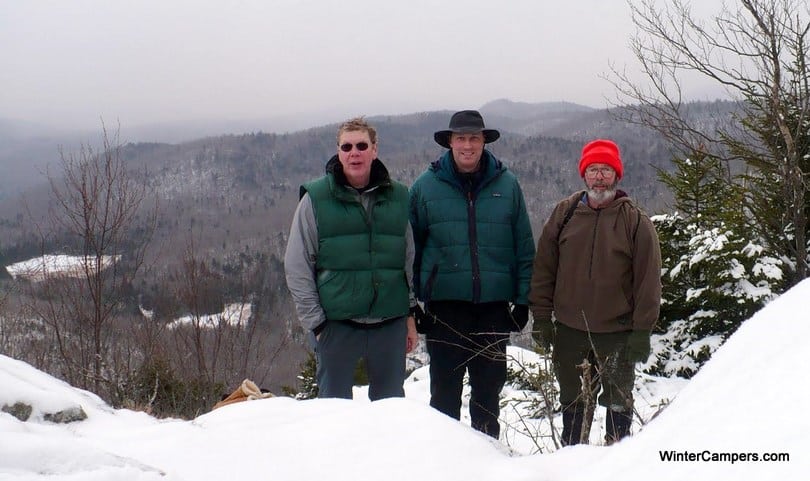 Shortly after 3pm we began our descent and returned to camp.  Back at camp we changed into dry clothes and were mocked by clearing skies and a view of a sunlight Peaked Mtn. 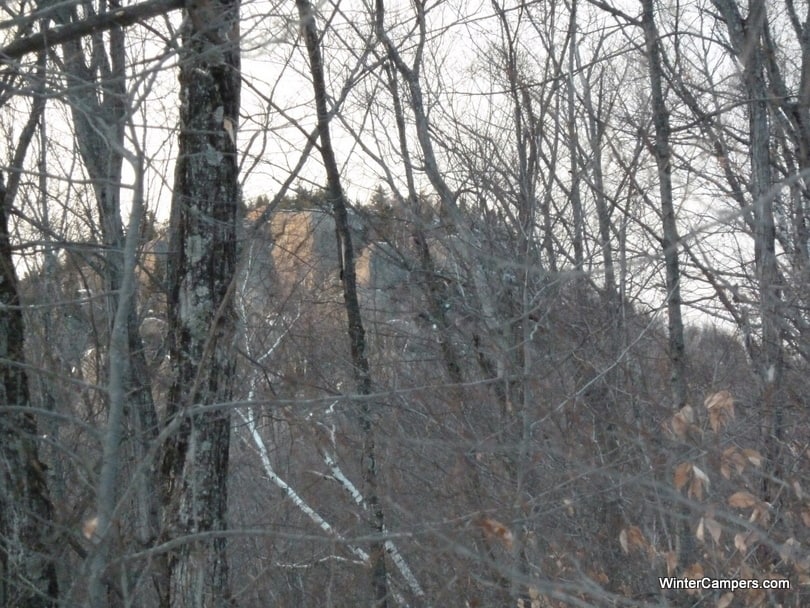 We boiled water and began our dinner preparations.   Water from the stream off the hillside was boiled in a large pot with half of the water used for hydrating and the other half used for chicken noodle soup.  We combined two packages of dried soup mix with chicken flavored ramen noodles and a can of chicken.

Skip started up our fire and we ate the  hot, salty soup with a bagel.  The combination of dry clothes, extra insulation, hot soup and cheery fire warmed us. 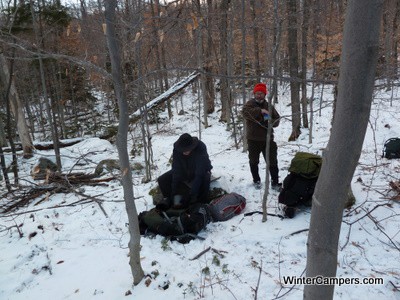 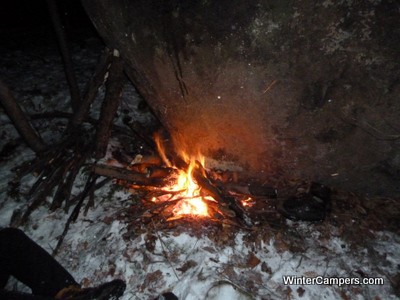 Skip brought waaay too many brats for us to eat and we sat up talking around the fire until 8pm.

During the night we received an inch of fluffy snow which we heard slide down the tent walls. 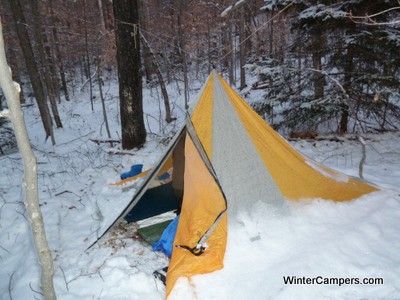 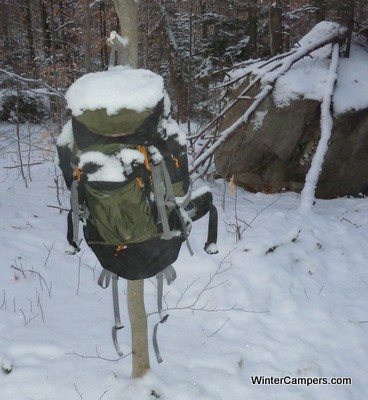 Strangely enough we heard a grouse drumming through out the night.  We noted that we had never heard one drum during the winter or at night.  The bright full moon must have deceived the male into being active all night.

The next morning we stirred at 7am and dealt with a frosty tent. We opted for a quick snack with the promise of a full breakfast at the Indian Lake diner. 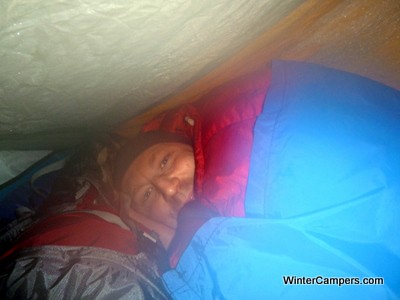 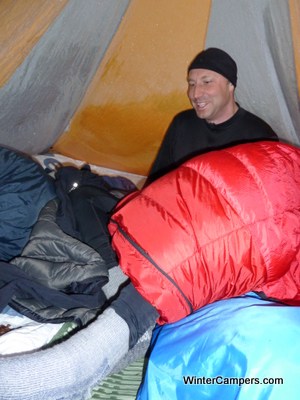 We packed up and were on the trail by 8am.  The hike out was ideal with sunny, warm conditions under clear skies. 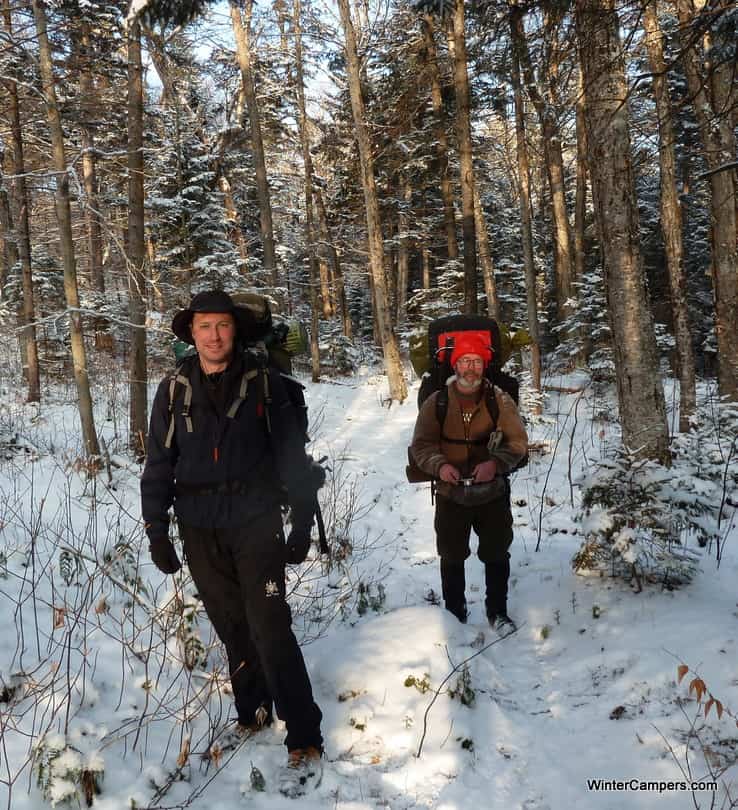 We past the several beaver ponds that we skirted on our hike in.