TEEPEE FIRE:
This is probably the most basic of fire designs. It is often used as a starter upon which bigger, longer-lasting fires are founded. It’s also a great fire for a quick warm-up or water-boiling snack break. This fire uses mostly kindling, but larger teepees can be created by adding larger logs vertically to the fire. A teepee fire is a good fire to direct heat upward and can be used beneath a hung pot on a tripod for fast heating. 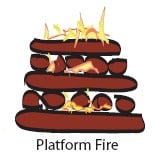 PYRAMID/PLATFORM FIRE:
This fire consists of a foundation framework of large logs laid side by side to form a solid base. A slightly shorter log is laid perpendicular and on top of this first layer. Each subsequent layer is slightly shorter as the platform or pyramid rises. This solid mass of right angle firewood takes a little effort to light but it’s well worth it for the huge amount of coals it produces, especially when the fire is lit on the top most layer and burns down through the layers.

A lighter version of the Pyramid fire is the platform. It’s similar in shape to the pyramid fire except the logs are layered only along the outside edge (like walls on a log cabin) with each level of logs slightly shorter than the ones beneath. This creates a hollow wood platform into which smaller kindling can be placed and ignited. It can provide quick warmth and be the start of any number of larger blazes.

PARALLEL FIRE:
Sometimes a fire is build between two long logs. If the logs are the same size, the tops of the log can be used to place pots for cooking.. It has the added advantage of prolonging the fire since the insides of the log are burning too, and its easy to direct the fire up or down the length of the side log, literally until the entire log eventually consumed. A similar fire is the trench fire, used almost exclusively for cooking. These work by either blocking the wind or in funneling the wind into the fire for a more concentrated and hotter “burn”. Several pots can be placed over the trench and the fire can be maintained at different levels for a variety of cooking options. 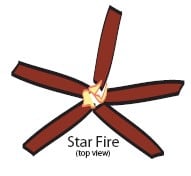 STAR FIRE:
A star fire is the fire design often depicted as the campfire of the old West. Imagine five or six logs laid out like the spokes of a wheel (star shaped). A fire is started at the “hub” and each log is pushed towards the center as the ends are consumed. It’s another fire that can be kept burning all night long with little maintenance.

REFLECTOR FIRE:
A reflector fire is really any fire that has some sort of flat surface behind it to direct the heat back out past the fire. This surface is erected behind the fire and pointed, for example, at the face of a tent, lean-to or other shelter. This back reflector can be made out of a few large slabs of bark, several logs laid against supports and stacked upon each other to form the surface. Rocks can also be used but just like those used to ring a fire, make sure they do not contain moisture. That trapped moisture can be heated to where it’s like a steam engine with no release valve. Exploding rocks can send shrapnel and shards flying in every direction!