We began our discussion of a possible dog sledding / winter camping trip in the early fall.  By organizing a small group and committing early we hoped to achieve a group trip discount.  Our plan was for a 4 day / 3 night dog sledding trip in Algonquin Park, Ontario Canada over the Holiday break. Each person packed their sleeping system and extra clothes in a duffel bag and brought along a small day bag for extra clothes, mittens, camera, lip balm, and snacks.

On Friday 27 December Matt, Mark, Len and Chris met Skip and Jim for the 8 hour drive to South River, Ontario; along Hwy 401 we noticed lots of homes still without power from an ice storm before Christmas. We met at the Algonquin Hotel after an uneventful drive and all went out for dinner.

Chocpaw Expeditions is located on the north west side of Algonquin Park, Ontario, 3 hours north of Toronto on Highway 124.

The next morning we met a Chocpaw Expeditions for an orientation.  There were 21 people participating, our group of 6, a group of 6 that was going out for an overnight trip and the remainder were day trippers.  The orientation provided information on the dog sleds, demonstrated how to handle and harness the dogs  and what to expect at our overnight in the prospector’s tent in Algonquin Provincial Park.

We drove to the dog yard to meet our guide, load our gear and get started on our trip.  Chocpaw uses  a line of Alaskan sled dogs with friendly dispositions that are bred to enjoy the work of the trail. To be called Alaskans, a dogs lines must trace to the kennels of the racers in Alaska.  The Chocpaw dog yard had 385 dogs, reportedly the 2nd largest dog kennel in the world; trailing a large sled dog kennel in Finland.  Each dog was staked in front of a raised barrel which contained straw for bedding. 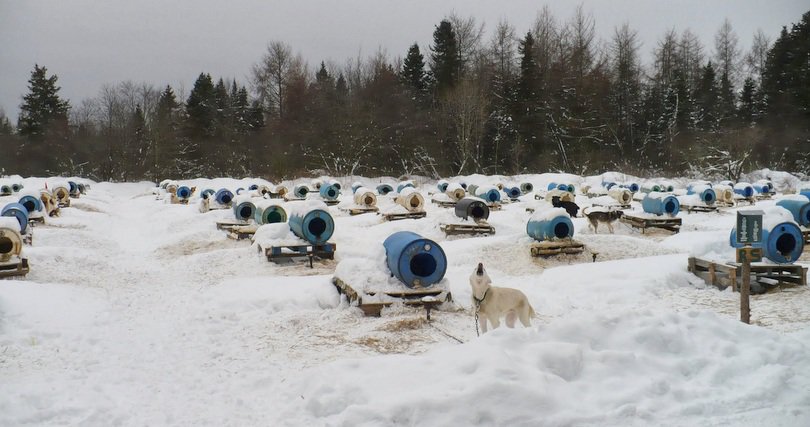 We met our guide, Jamie Sands.   Jamie graduated from the University of Waterloo with a Degree in Environment and Resource studies, minor on Geography and specialization in Parks.  Shortly after finishing at the university, Jamie got a job at a dog sledding  company in the Arctic town of Inuvik in the Northwest Territories.  Jamie worked there for a year as a guide for a small dog sledding kennel learning winter travel and survival skills and the ins and outs of dog sledding and dog care while exploring the frozen lakes and rivers of the Mackenzie delta.  After returning to Ontario Jamie started working at Chocpaw Expeditions where he could continue working with sled dogs and educate people about sled dogs and the art of dog sledding through dog sled trips through the Algonquin wilderness.

We were instructed to pack our duffel bags in our sleds, wrap everything in a plastic tarp and secure the load with a rope binding and truckers hitch.  Once our sleds were set we assisted in harnessing the teams for the other groups by getting the dogs, 2-wheeling them on hind legs to harness and hooking them up to the tug lines. 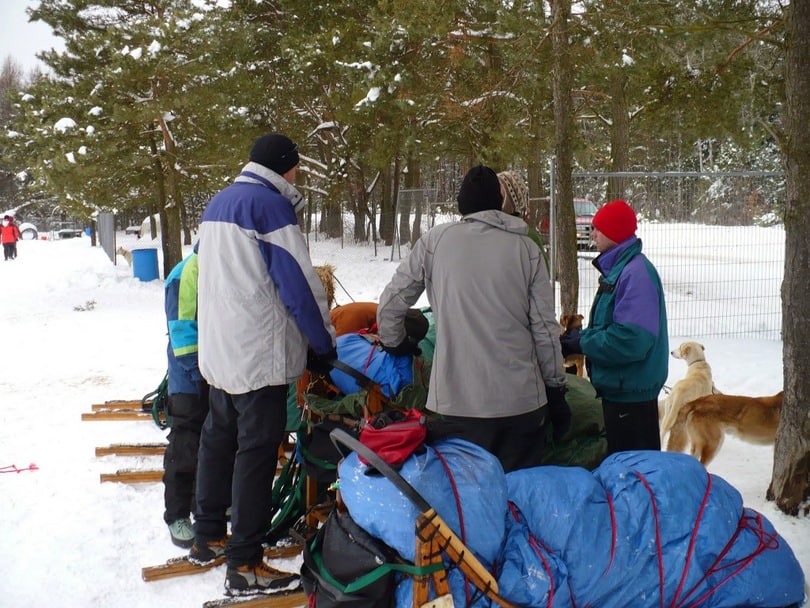 Each of our sleds had a large plastic tag with the names of our six dogs ordered in the positions they took in the hitch: lead, point and wheel.  Each dog was given a color code (red, blue, red & white) which corresponded to the size of their harness.  Each X-harness had a corresponding color coded braided nylon cord loop.  The six harnesses always stayed with the sled clipped together by the neck yoke that joined the two lead dogs.
Our dogs were Laser (white), Hilti (black) in lead, Tipsy mainly black) and Anka (black) in point and Logan (tan) and Hank (black and grey) as wheel dogs.

It was about 11:30am when our group finally departed the dog yard with one person riding on top of the gear and the other person riding the rails and standing on the brakes to slow down the dogs’ exuberant energy at the start.  We proceeded out dirt roads, then to a logging road providing access to snow mobile and dog sled trails in Algonquin Park. 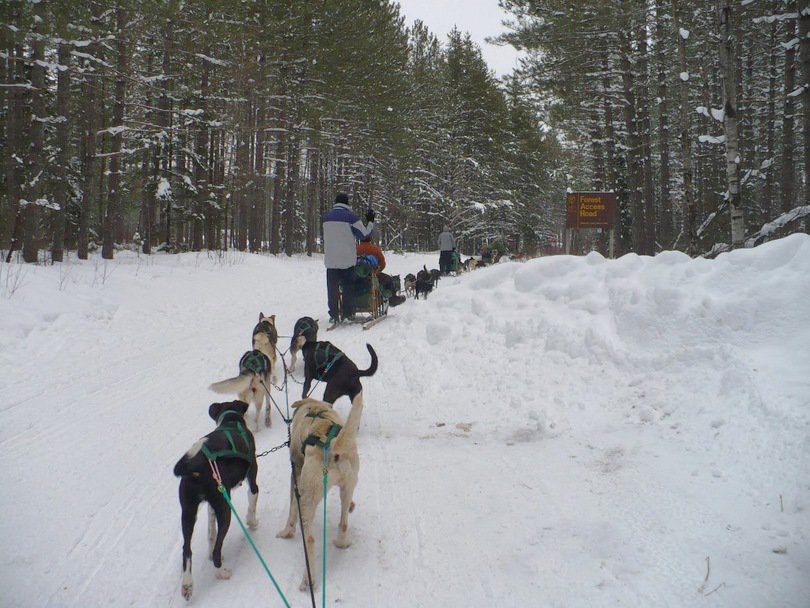 The person riding on the back of the sled would steer it by weighting a runner and shifting from side to side to take a turn.  The driver would also watch the tugline to make sure it was tight – especially down hills. As we proceeded we encountered small hills which required the rider to dismount and the driver to push the sled up the hill.  One of our lead dogs, Hilti, was a former race dog making her 1st expedition trip; when she encountered a hill she would stop and look over her shoulder at the driver questioning what was going on.  When one of the lead dogs stops or slows down the entire team would stop or slow down.  Pushing the loaded sled up the hill was hard work.

In addition to our day bags, each sled had a nylon pouch/day bag large enough to carry Nalgene water bottles, granola bars and mittens.  I started out wearing gloves but quickly changed into mittens as my hands got cold from gripping the sled handles and curtailing circulation. My second requested stop was to layer on more clothing. I had several cups of coffee at breakfast but made the error of not hydrating during the day and felt the effects during the afternoon.  The water bottles were not insulated and the water was very cold, but I drank the entire bottle during a late afternoon break.

The plan was to travel among Chocpaw’s preset base camps consisting of large heated prospector tents.  The tents have a raised plywood sleeping platforms, and wood stoves.  Depending on the group and trail conditions, travel time is 2½ hours to 3 hours.   The camps are in the range of 20-25 miles apart, so it is necessary to cover at least that distance every day.

We skipped eating lunch on the way in and got to our camp mid-afternoon.  After arriving at camp we unharnessed the dogs and hooked them onto a chain.  We unloaded our sleds and gathered firewood for the stoves.  Instead of focusing standing dead wood, the Chocpaw permit entitled them to cut standing birch trees; probably due to the fact that birch has little commercial value for foresters.  We gathered limbs and loaded them onto an empty dog sled to transport back to camp where Jamie employed a chainsaw to buck it up into burnable pieces.  Once a fire was started and the tent began to warm up we ate our lunch which consisted of sandwiches and tomato vegetable soup.  We  retrieved water from the stream and cared for the dogs.  Before our dinner we watered the dogs using ‘bait water’; heated water containing melted blocks of dog food to improve palatability.  Each dog was offered an opportunity to drink from the bucket for a couple of minutes.  Dog food consisted of chicken and processed dog food into blocks the size of large soap bars.  Each dog got 3-6 bars to eat.

Chocpaw standardizes all their meals so all groups had steak and steak fries on night one, chicken stir fry on night two and ziti with meat balls on night three. Only three hours after wolfing down soup and sandwiches we were feasting on steaks and steak fries.  Jamie cooked meals on a propane fueled stove.  Below steaks from first night’s dinner and 150 meatballs from night three.  Chris demonstrated All-Pro level eating talents by consuming 31 meatballs! 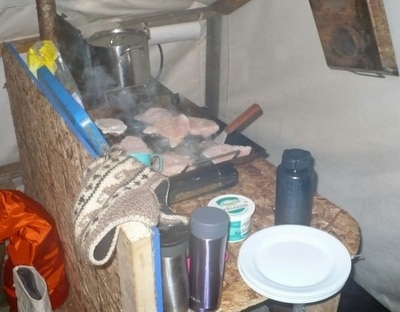 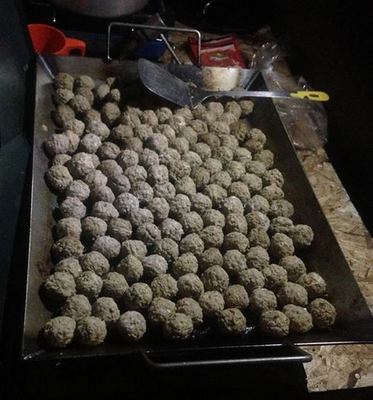 After dinner we hung up hats, mittens, boot liners and clothes to dry out in the tent while we played pitch.  Len caught on quickly and was a proficient pitch player after three consecutive nights of playing pitch.  Before bed we ‘strawed’ the dogs by breaking open two bales of straw and shaking out a section for each dog to have as a bed.  Even more than food and water the dogs seemed grateful for their straw beds.  They would scratch their straw around to suit their purposes and settled in to rest comfortably. 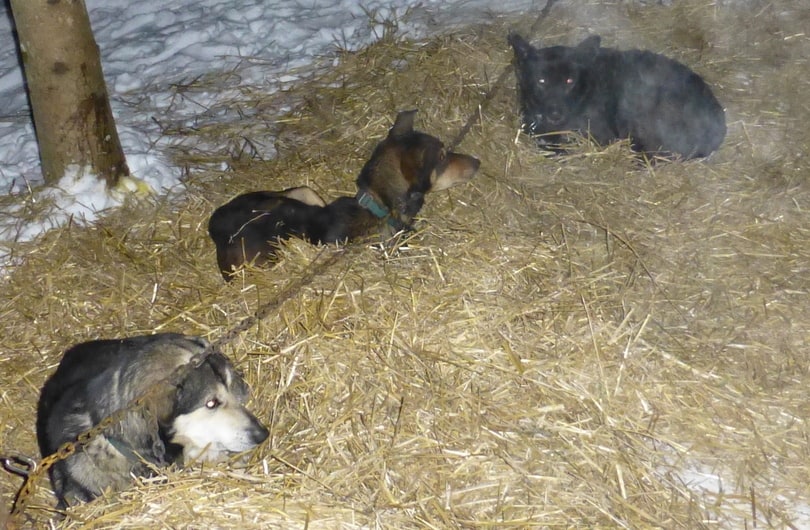 During the night Jamie would awaken 2 or 3 times to replenish the stoves and at least once during the night he would check on the dogs to ensure they were staying warm.  With temperatures projected to be -18F he checked the huddled dogs by sliding a hand along their belly to check for cold spots.  Dogs that were huddled and cold would be brought into the tent to warm up.  Fortunately none of the dogs required warming up.

Our 1st night we ended up sharing the large South campsite with a small group doing an overnight trip.  They stayed in a large tent while we split our group between two smaller tents; Matt, Mark, Chris and Jamie in the heated, ‘cooking’ tent and Skip, Len and Jim in the other unheated tent.  The tents had a raised plywood sleeping platforms; on top of that we put ensolite sleeping pads and our own sleeping systems. 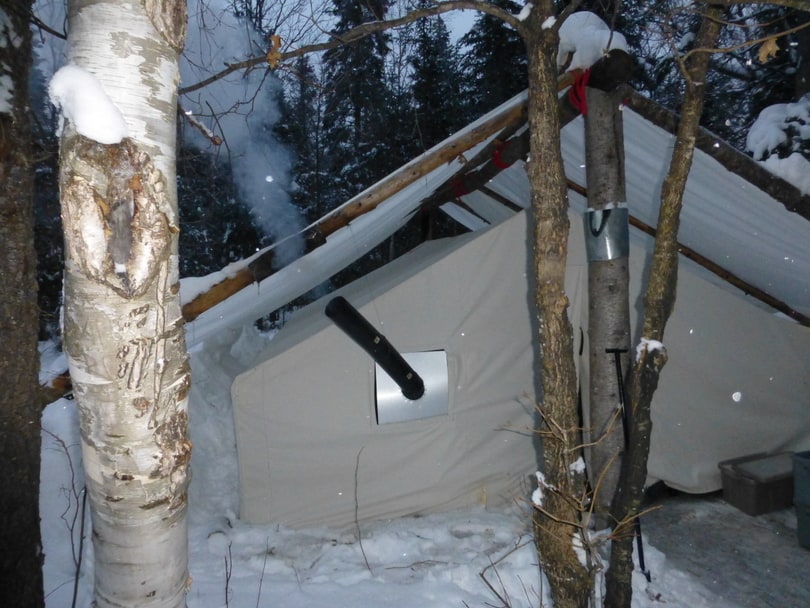 We slept well and awoke slightly before 7am as the dogs started howling for breakfast.  After our breakfast we helped the overnight group harness their dogs for their return to the dog yard.  For Day 2 we took day packs and lunch and had largely empty sleds as we explored  the Upper 27  Trail located just east of Smyth Creek. 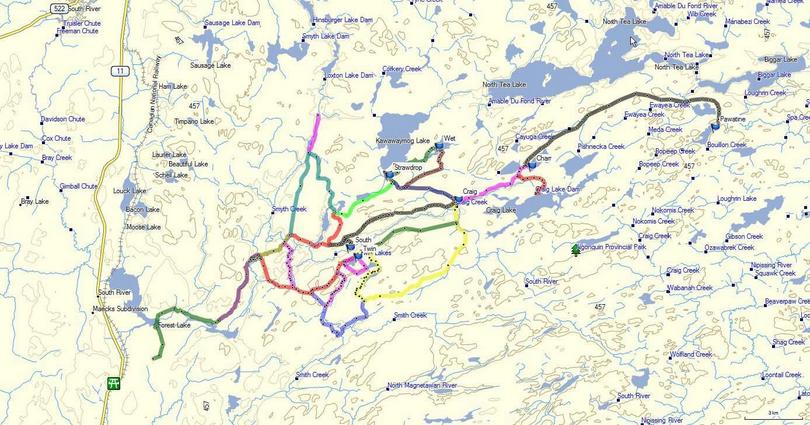 As I largely drove the sled on day one, Skip drove the sled as I sat comfortably on a closed foam pad.  Lunch was a rushed affair as we stopped our teams, set our snow anchor and flipped the sled onto the snow anchor.  One person sat on the sled and held the yoke of the lead dogs.  Jamie would walk the strung out crew dispersing food and a hot drink.  We generally did not squander time on lunch break as we chilled down and the dogs were eager to move again. 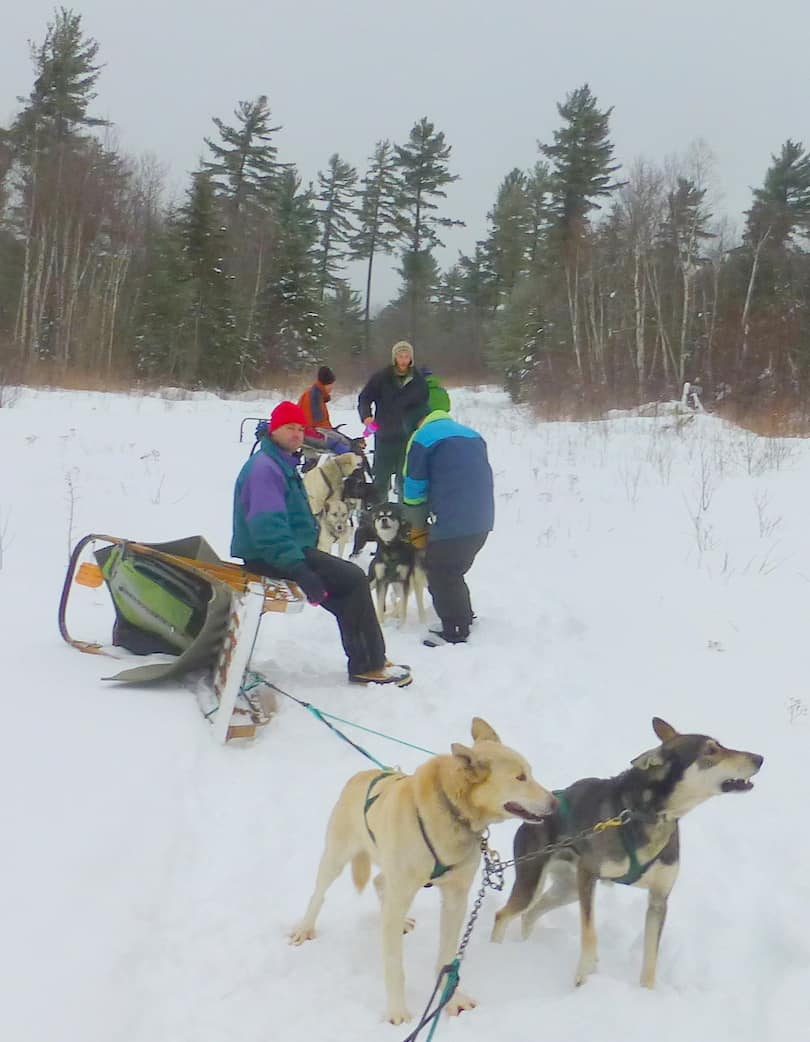 After 3+ hours we returned to South Camp where we moved our gear to the large tent.  Len, Skip and I shared some hot coffee from my thermos that had accompanied our sled throughout the day.  We warmed our feet and hands.  The large tent had a stove on each end and we used them both to take the chill out of tent and dry out our gear. 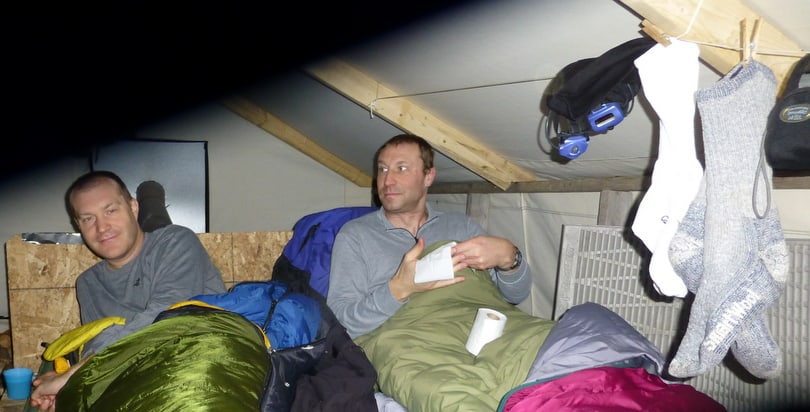 Day 3 we loaded up our gear, harnessed the dogs and headed along Mary Jane Trail to the Straw drop where we picked up two bales of straw for dog beds.  It was windy and 4 degrees during the day.  I had to cover my face with a bandana to thwart the beginnings of frost bite on my left cheek.  From the straw drop we proceeded to the camp at Craig Creek where we dropped off the straw and took the  trail upstream to the Craig Creek Dam.  After a few minutes of enjoying the viewwe turned the teams around and headed back to camp. 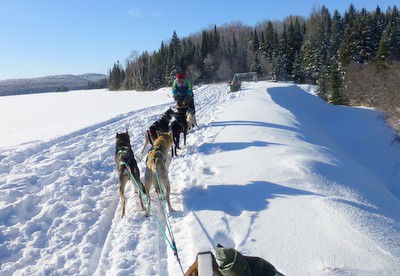 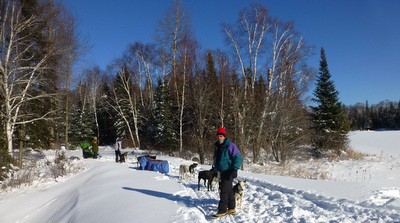 Based on our experience the prior day, the last day Skip and Jim volunteered to take on more weight rather than concede the 2nd position to Matt & Chris.  Our return trip along Ridge Trail was twisty with several steep hills that required deliberate spacing among the teams.  We had several “off-trail” encounters along this trail.   As we returned along more familiar trails the dogs recognized they were returning to the dog yard and kept a steady pace.  Our return trip transpired in three hours and we arrived back at the dog yard where we returned the dogs to their barrels, unloaded our gear, and changed our clothes.   We filled out evaluation forms, drank coffee and ate a bit of chili before departing South River at 3pm for our return trip home.  Below: Jamie, Matt, Chris, Jim, Skip, Len and Mark in the sled. 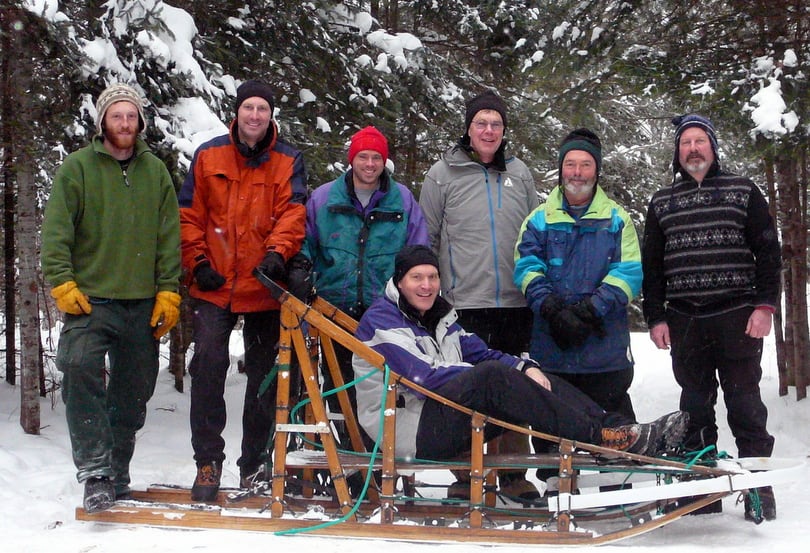