Ruffed grouse require a specific combination of habitats to survive.  They live in mature deciduous forests that include nearby stands of poplars or birches.  During most of the year, they eat the buds and twigs of these trees. They roost in coniferous trees when they’re available, but they also roost in large deciduous trees.

Ruffed grouse survive winter snow storms by diving full speed into deep snow at dusk to sleep.  They may tunnel a short distance (10-14″) to form a burrow, known as a kieppe (kee-ep-ee).   Falling snow can hide the evidence of its entry.  The insulating qualities of both their feathers and the snow itself prevent the birds from freezing.  In the morning, the birds break out of their caves and take off again. If there is a cold snap or heavy snowfall, the ruffed grouse might remain in a snow cave for a few days, making them vulnerable to predators such as foxes and bobcats.

A grouse bursting at one’s feet from flat snow covered ground can be quite startling. This grouse had left before I approached on snowshoes, but one can see the faint feathery outlines of it’s wings and tail around the escape hole. 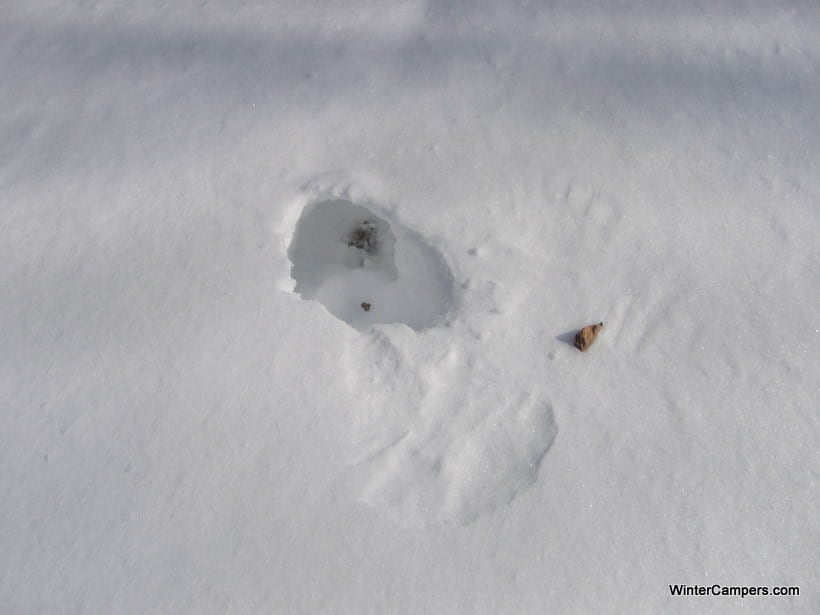