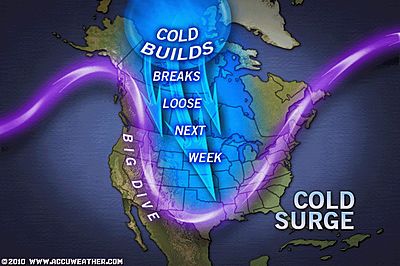 Accuweather says that signs continue to point toward an arctic cold outbreak beginning the third week of November in the Northwest, expanding to much of the eastern half of the U.S. before Thanksgiving.  Snow and a freeze-up accompanying the cold blast may lead to travel problems. The air will have tremendous shock value, given the complacency in the weather now over the Plains and much of the Southeast.

It appears building cold air over Siberia will soon move eastward through the Arctic over the next week or so, then drive southward through North America during week three of the month. Alaska would feel the cold around mid-month. Next, steering currents would then drive frigid air southward through western Canada into the Northwest and northern Rockies.

A large high pressure area at the core of this air could be preceded by an upslope snow event during the third week of the month that would spread snow from Great Falls, Mt. to Cheyenne to Denver. It is possible this invasion of cold air would first spin up a major storm over the middle of the nation, where it comes in contact with unusual warmth building in the East. Whether or not a wrapped-up storm with wind-driven rain, severe thunderstorms, and a Midwest blizzard comes to pass before the cold reaches the East remains to be seen. However, that too is a possibility. It is looking more and more likely that the coldest air of the season so far, with strong winds, may greet people during the weekend prior to Thanksgiving from the Plains to the Atlantic Seaboard. Most likely, once the cold reaches the East, temperatures will rebound in the Northwest.  AccuWeather.com is expecting a stormy, wintry December over the northern tier of the U.S. It appears this outbreak will set the stage for that pattern.