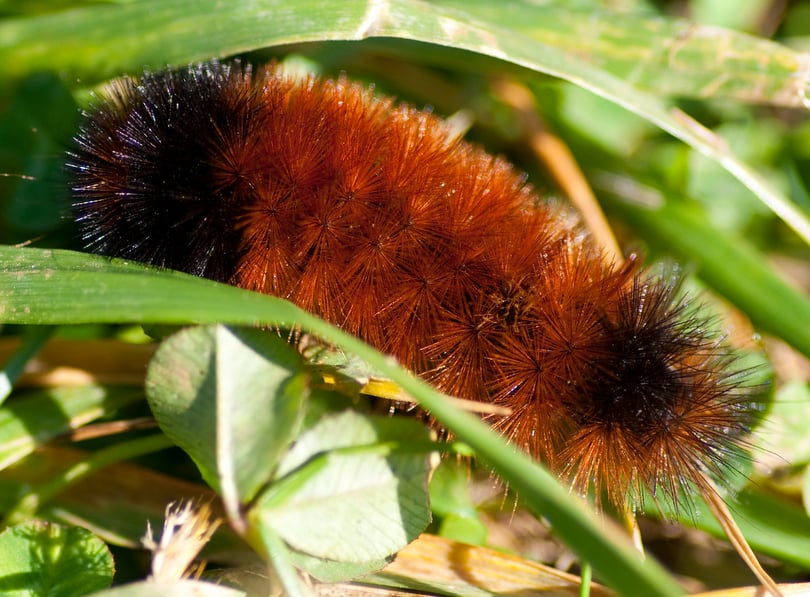 The woolly bear caterpillar is the larval stage of the Isabella tiger moth, Pyrrharctia Isabella. The Isabella tiger moth overwinters in the larval stage. In the fall, caterpillars seek shelter under leaf litter or other protected places.  They eat mostly weeds, including dandelion, clover, and grasses. Woolly bears are relative speedsters in the caterpillar world, crawling at a neck-snapping .05 miles an hour, or about a mile a day.

The woolly bear caterpillar—with its distinct segments of black and reddish-brown—has the reputation of being able to forecast the coming winter weather.  According to legend, the wider that middle brown section is,  the milder the coming winter will be. Conversely, a narrow brown band is said to predict a colder, snowier winter. Among a group of woolly bears, the stripes can vary greatly, making their forecast difficult to confirm;  the same group of eggs can even hatch into caterpillars of varying dark and light bands.

Dr. C.H. Curran, former curator of insects at the American Museum of Natural History in New York City, tested the woolly worms’ accuracy in the 1950’s. Although his initial  surveys found an 80% accuracy rate for the woolly worms’ weather predictions, Dr. Curran gave up the study in 1955 after finding two groups of caterpillars living near each other that had vastly different predictions for the upcoming winter. Other researchers have not been able to replicate the success rate of Curran’s caterpillars.

Most scientists discount the folklore of woolly bear predictions.  Many variables may contribute to changes in the caterpillar’s coloration, including larval stage, food availability, temperature or moisture during development, and age.

Mike Peters, an entomologist at the University of Massachusetts, says there could be a link between winter severity and the brown band of a woolly bear caterpillar. “There’s evidence,” he says, “that the number of brown hairs has to do with the age of the caterpillar—in other words, how late it got going in the spring. The [band] does say something about a heavy winter or an early spring.  The only thing is . . . it’s telling you about the previous year.”