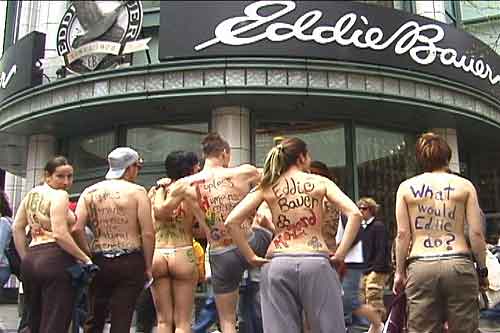 Did you know that Eddie Bauer was actually a person? He was an avid outdoorsman who coupled his love of outdoors sports with his business.  According to information gleaned from Wikipedia and Answers.com: Eddie Bauer was born on October 19, 1899, on Orcas Island, located in Puget Sound off the coast of Washington state. His parents, Jacob and Mary Catherine Bauer, were Russian-German immigrants who operated an Italian plum farm. In 1920, Eddie Bauer, at the age of 21 established his first store in downtown Seattle. “Eddie Bauer’s Tennis Shop” opened in the back of a local hunting and fishing store and specialized in building and repairing tennis rackets.  Eventually Bauer expanded his line of merchandise to include his own hand-made golf clubs and fishing tackle and he changed the name of his store to “Eddie Bauer’s Sport Shop.” Bauer would go on to develop and patent a standardized shuttlecock which helped popularize badminton in the United States. While operating this first store Bauer developed his creed, “To give you such outstanding quality, value, service and guarantee that we may be worthy of your high esteem,” which is still used by the modern company which bears his name.

While on a winter fishing trip in 1936 in Washington, Eddie Bauer developed hypothermia. After this he began developing alternatives to the heavy wool garments used by outdoorsmen at the time. He attempted to offset the bulkiness of down by quilting a down-filled jacket based on the light but warm goose down-filled clothing his uncle from Russia had told him about.

In 1940, Bauer then patented the first quilted goose down-insulated jacket in the United States.  In 1942 the US Army Air Corps commissioned Eddie Bauer to develop the B-9 Flight Parka designed to keep pilots warm at high altitudes. More than 50,000 parkas were manufactured for World War II airmen.  In addition to the parkas, Eddie Bauer supplied the army with backpacks, pants, and sleeping bags which became standard issue for American troops in the war.  Bauer eventually sold over 100,000 sleeping bags to the armed services.  In 1945, soon after he began selling women’s clothing as well as men’s, Eddie Bauer issued his first mail-order catalog. The original mailing list included the names of 14,000 soldiers who had worn Eddie Bauer clothing provided by the army.

By 1950, Eddie Bauer’s health was declining due to overwork and a serious back injury. He took on local businessman and hunting partner, William Niemi, who reorganized the store and improved cash flow. In 1968, Eddie Bauer retired and he and his son sold their half of the business to William Niemi and his son for $1.5 million.  In 1971, William Niemi sold the company to General Mills. After the sale the company shifted its focus toward casual clothing and dropped the tagline “Expedition Outfitter.”

Eddie Bauer died of a heart attack in Bellevue, Washington on April 18, 1986, two weeks after his wife died of pancreatic cancer. At the time of his death Eddie Bauer Inc had 39 retail stores and two million mail order customers.

In 1996 the Eddie Bauer company launched its Web site, www.eddiebauer.com, establishing a third channel of distribution to complement the retail and catalog divisions.  By 1998, over 600 stores had been opened in North America (556), Japan (32), and Germany (9).  In 2001, the Eddie Bauer company teamed with American Recreation Products through a licensing agreement to launch a collection of camping equipment.  In June 2009, Eddie Bauer Inc. filed for Chapter 11 bankruptcy protection.  A new management team led by Mr. Fiske began returning the company toward its outdoor adventure roots. First Ascent is a collaboration between Eddie Bauer and Whittaker Mountaineering offering ‘guide quality’ gear. The company is trying to separate its well-known Eddie Bauer brand —  associated with more casual, semi-performance clothing — from the new technical line.  These clothes are now being offered in Eddie Bauer retail stores and include several items in tall sizes.

And to think it all started with an outdoorsman getting cold.  Geeze, we have all been there, we just don’t have a company named after us.