Ötzi the Iceman and the Ten Essentials

On September 19, 1991, in the mountains between Austria and Italy, hikers stumbled upon the corpse of a 5,300 year-old man eroding out of a glacier. Dubbed “Ötzi” this perfectly preserved iceman is the oldest human ever found.  The Iceman stood about 5’5″ tall, and weighed about 134 lbs. He was in his mid-40s, and his strong leg muscles and overall fitness suggest that he may have spent his life herding sheep and goats in the mountains. His health was fair for the period–he had arthritis in his joints and he had whipworm – an internal parasite.

Ötzi carried tools, weapons, and containers including an animal skin quiver with arrow-shafts made of viburnum and hazel wood, sinews and spare points. A copper ax head with a yew haft and leather binding, a small flint knife and a pouch with a flint scraper and awl were all included in the artifacts found with him. He carried a yew bow. Otzi’s clothing included a belt, loincloth, and goat-skin leggings with suspenders, not unlike lederhosen. He wore a bear-skin cap, outer cape and coat made of woven grass.  His shoes were waterproof and wide, seemingly designed for walking across the snow; they were constructed using bearskin for the soles, deer hide for the top panels, and a netting made of tree bark.  Soft grass went around the foot and in the shoe and functioned like modern socks. 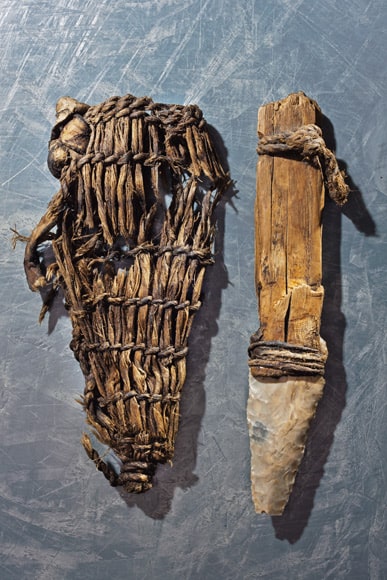 We wanted to compare what he was carrying with our list of Ten Essentials.