It was cold, about 19 degrees, as four of us-Jim Muller, Mark Hay, Jay Katonica and Scott Handy set out on a slippery, snow-covered bushwhack up Warren County’s Mount Blue.  Our canine escort, Maddux, a German shepherd/husky cross, bounded ahead with enviable ease as the rest of us struggled on the slick footing.

Donning snowshoes it was easy and straight forward crossing over Garnett Lake.  then we followed the mile-long trail leading to Lizard Pond on the southwest shore. 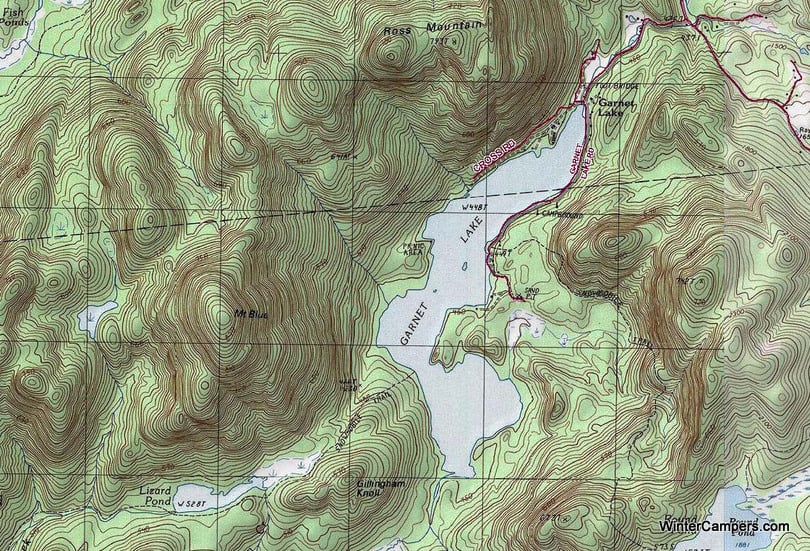 According to Bill Ingersoll “long ago, some unknown surveyor recorded the name of this small pond as “Lixard Pond,” probably in error. This simple misspelling shaped the topographic maps of the next century, for the name “Lixard” appeared on the U.S. Geological Society maps for decades to come. The metric USGS maps currently available label it as Lizard Pond, but this restoration of proper spelling has gone largely unnoticed. People still refer to it as Lixard Pond as though it is the actual name – or else they just haven’t updated their maps”.

But as soon as we hit the shore line Mark pulled out the trail guide. Now I am all in favor of excessive planning but it is with some trepidation that we watched Mark consult the trail guide. Although Mark had been on many winter camping trips he was not known for organizing and planning any trips. His previous attempt at organizing resulted in the “The Much Anticipated Never Accomplished Rainbow Falls Trip“. 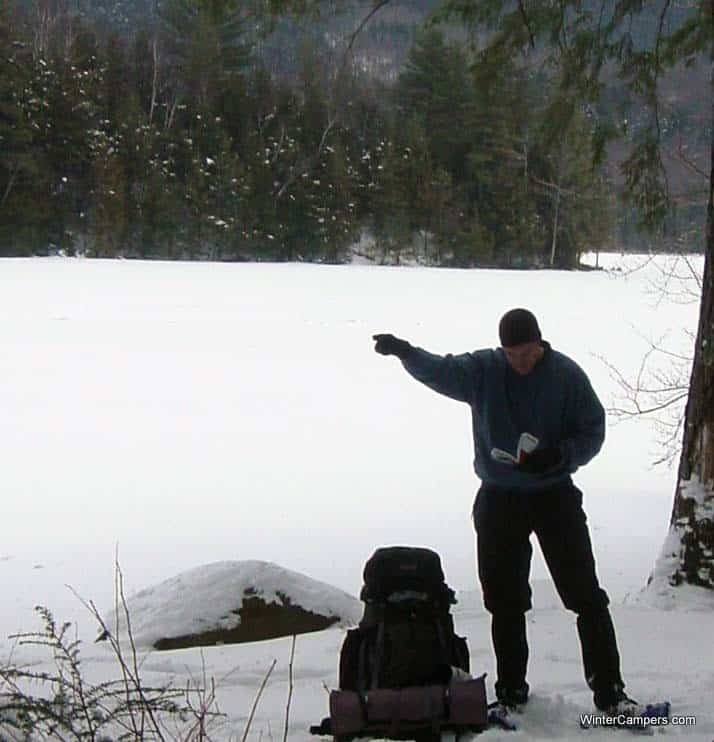 OK, at least Mark is sure where we came from…  While Mark shed his Beyond Fleece Steel Windshirt and consulted the trail guide Scott hydrated and kept an eye on Maddux. Jay decided to surreptitiously check his GPS Unit. Not that Jay would betray a trust in Mark, but hey it never hurts to measure twice. 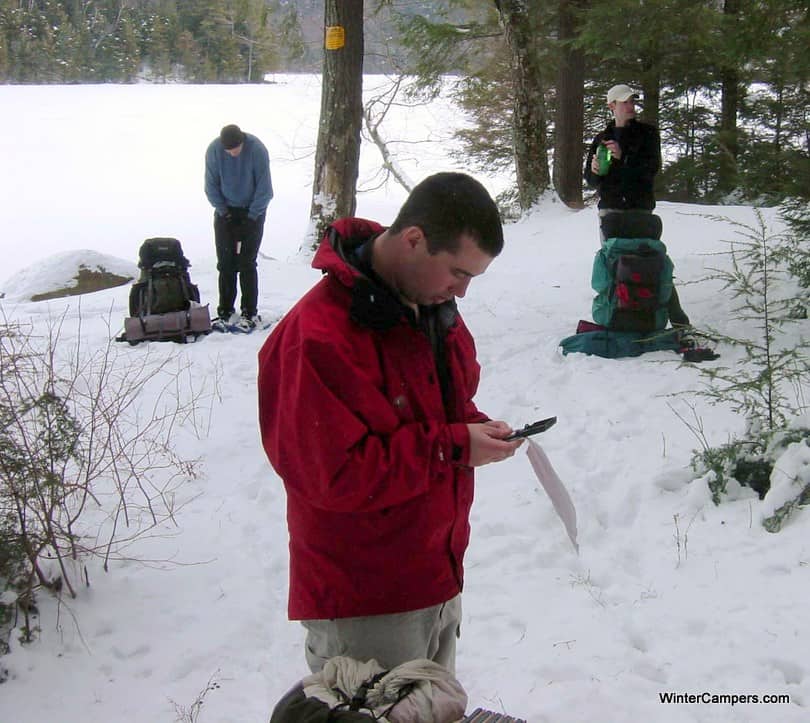 We left the Lizard Pond trail where the swamps in the pond’s valley first become visible, and headed up the mountain.
Mount Blue, which rises from a solid ledge deep in Garnet Lake to a height of 2,940 feet with an elevation gain of ~1500′ from the lake.  Mount Blue is part of the Wilcox Lake Wild Forest, a popular winter recreation area in the southeastern corner of the Adirondack Park. 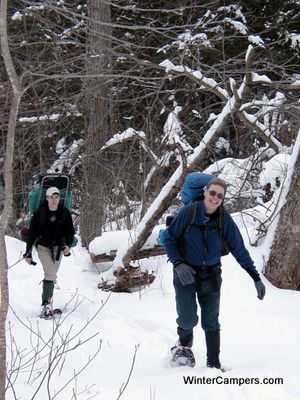 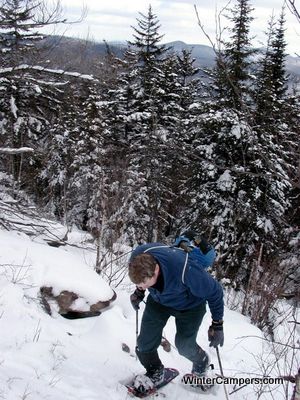 Although Mark, who had planned the trip, touted the hike as “relatively easy,” we found out later that DEC’s Wilcox Lake Wild Forest Draft Unit Management Plan characterizes it as offering “moderately difficult bushwhacking opportunities to adventuresome hikers and snowshoers.” This proved an apt description. Fortunately, Jay had packed trekking poles, which he graciously loaned Jim for the bush whack up and down Mount Blue. Needless to say, they were a great advantage and a set of trekking poles where purchased after the trip. 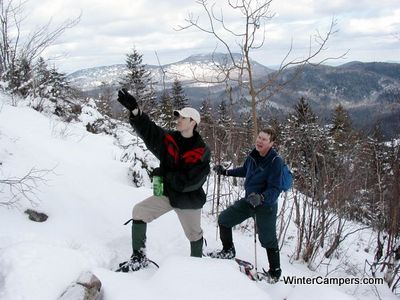 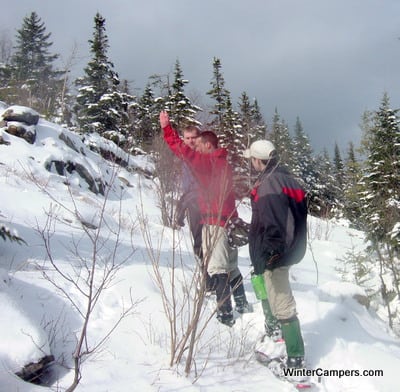 Treeless patches on the southeastern side of the mountain-the result of a 1908 fire-affording us splendid vistas. Taking advantage of these open areas, ledges and false summits, one can enjoy 270 degree perspectives of Crane Mountain, Lizard Pond, Bearpen Peak, Baldhead Mountain and Moose Mountain. To the west are Georgia Mountain, Harrington Mountain, New Lake Mountain and Wilcox Mountain. With these glimpses of the impressive panorama providing inspiration, we scrambled onward and upward.

As we climbed up Mount Blue there were several ledges and false summits offering views of Garnet Lake and Lizard Pond. 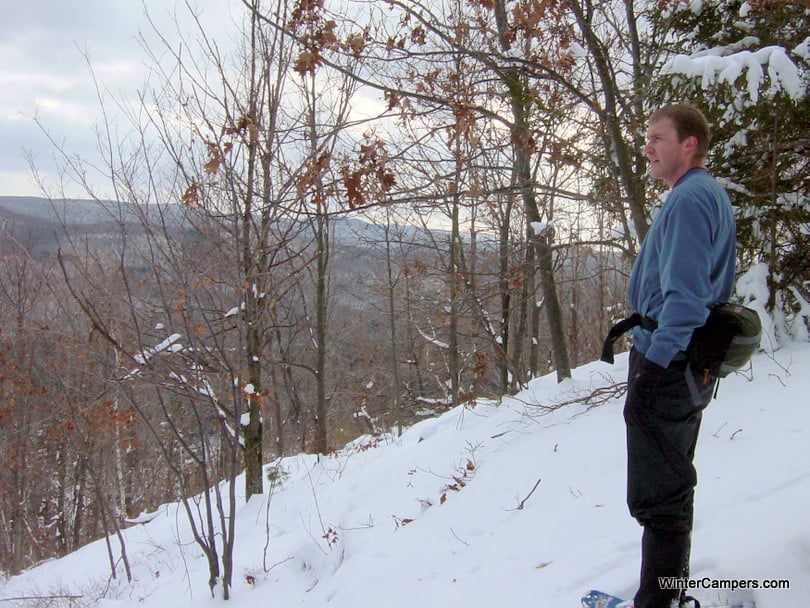 At the peak, we posed for the requisite group photograph and enjoyed a quick snack while the wind blew in increasingly dark cloud cover. 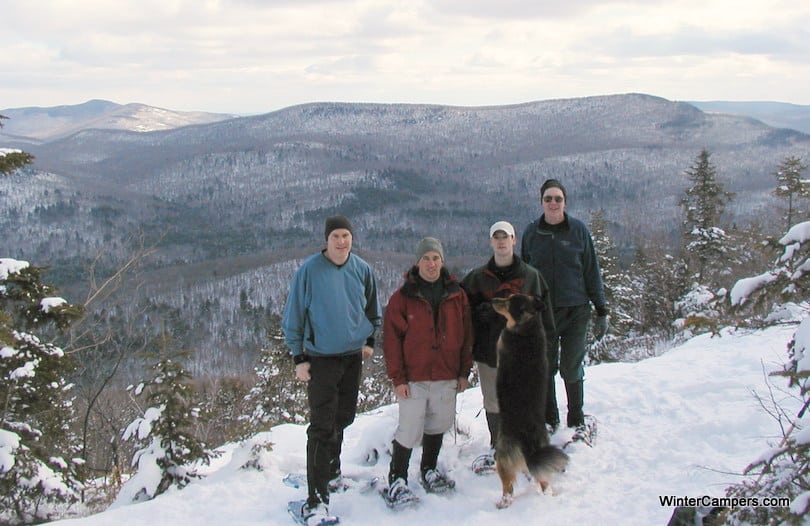 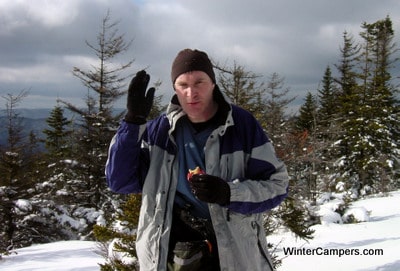 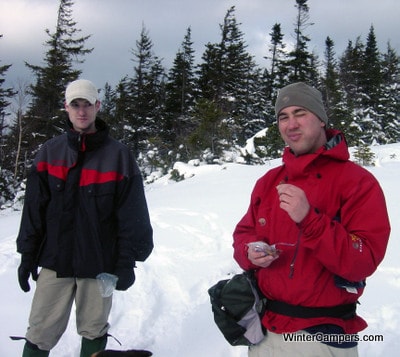 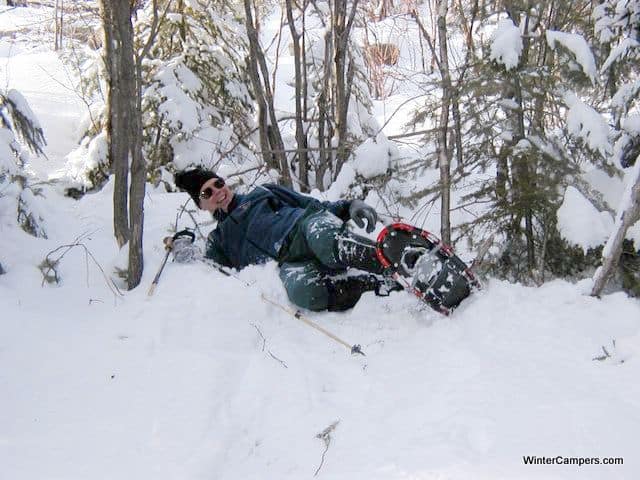 Fortunately, no one got hurt as we tumbled and slid our way down the mountain and soon we re-joined our backpacks and made our way to the lean-to along Lizard Pond. We hiked the remainder of the trail along Lizard Pond to spend the night at the lean-to on the western shore. 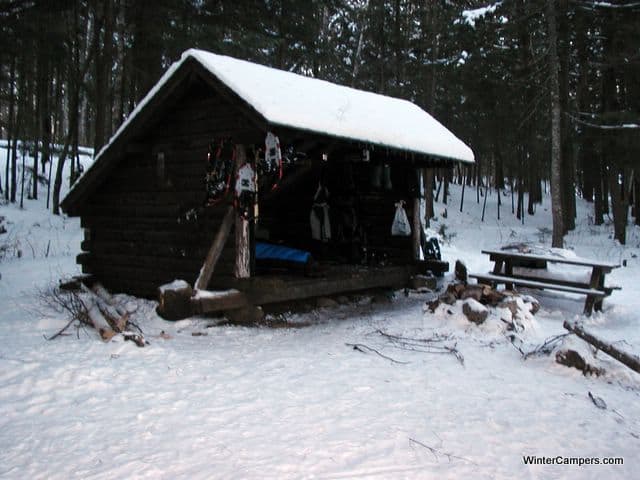 Once we settled in at the lean-to, we boiled water for hot drinks and wolfed down reconstituted freeze-dried meals. In other situations, what passes for food in these highly processed packages would be turned back to the kitchen. However, the salty, hot food tasted great to four tired, wet and cold winter campers. 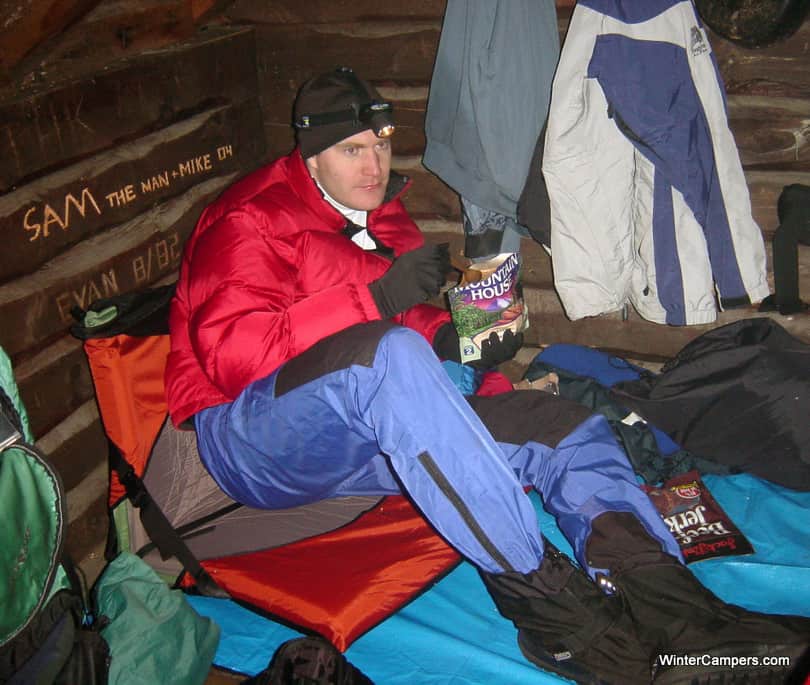 but for Maddux was dried dog food. 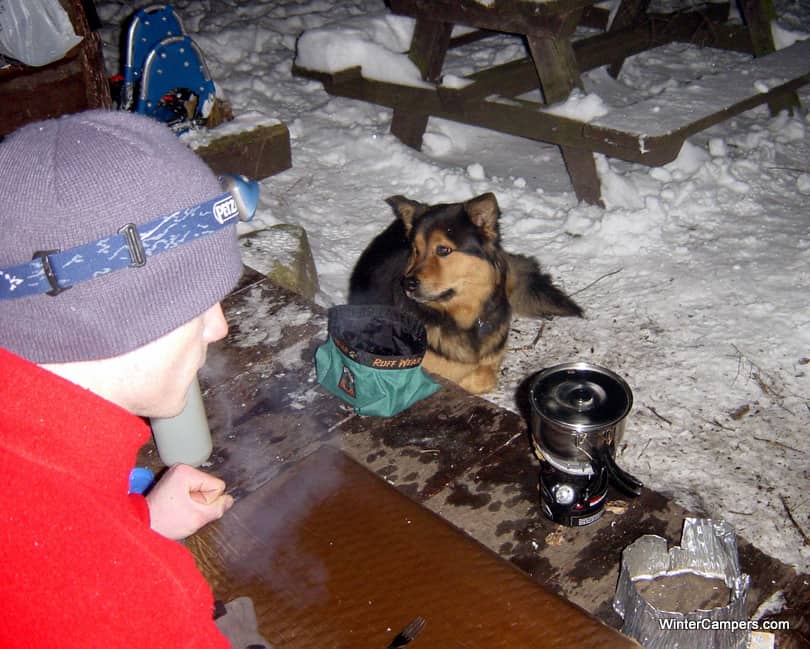 Afterward we sat around a fire and talked until bedtime as flurries floated down. This is one of the best parts of winter camping. Since it is dark early, there is lots of time to chat, laugh and discuss future trips. Not only does a campfire help pass the time during the long nights, but the sense of camaraderie is enhanced as the night deepens around a campfire circle. As our fire dwindled, we settled into warm sleeping bags and took advantage of the extra darkness to log a solid night’s sleep. 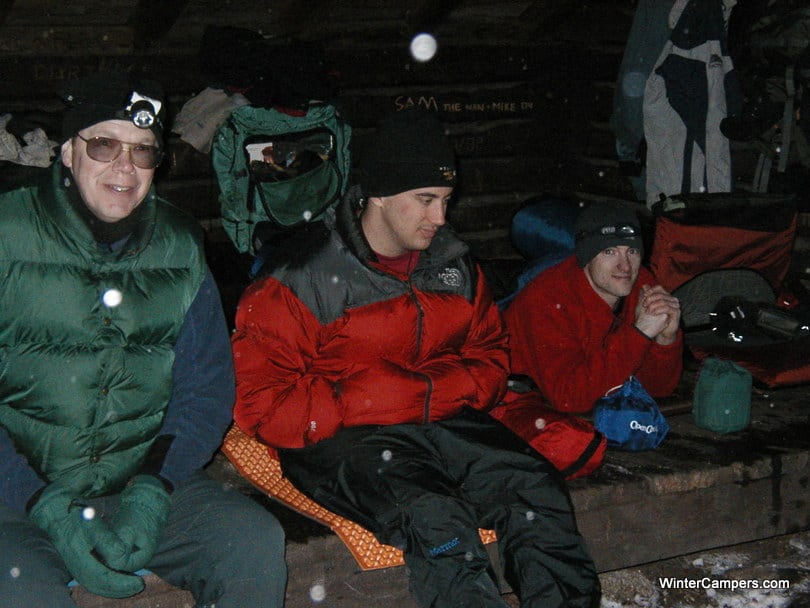 We settled into warm sleeping bags. This was possibly the maiden voyage for my Western Mountaineering winter sleeping bag – an extra long, over stuffed, over engineered Puma. 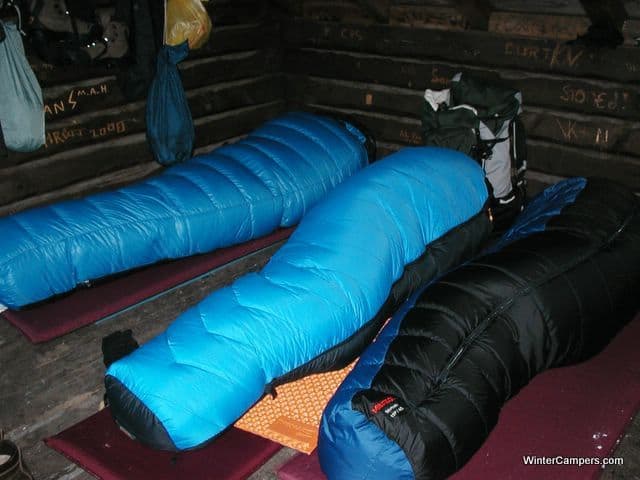 In the morning, we awoke to the sun illuminating the back side of Mount Blue across Lizard Pond. Mark was the first to arise while the rest of us lingered in our warm sleeping bags and offered breakfast ideas. Despite our imaginative suggestions, Mark gave us hot water, which we used to make a simple breakfast of hot oatmeal washed down by coffee and hot chocolate. 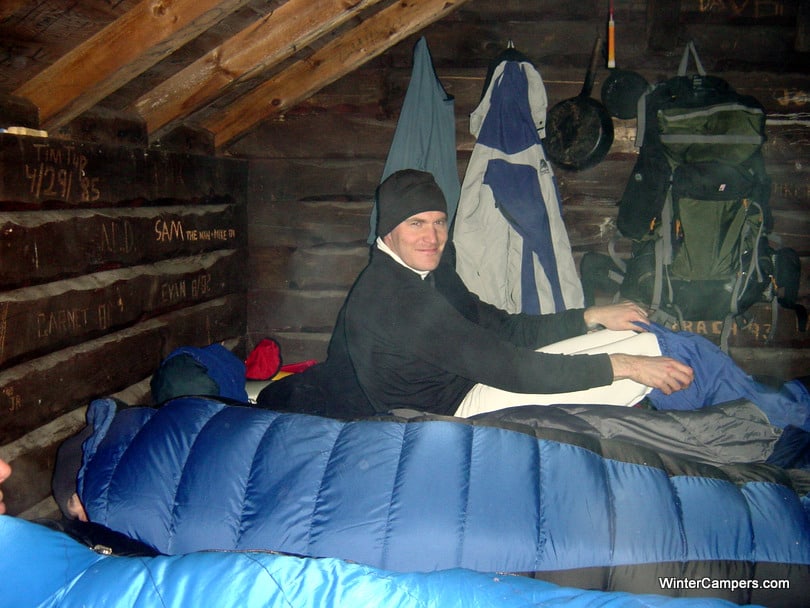 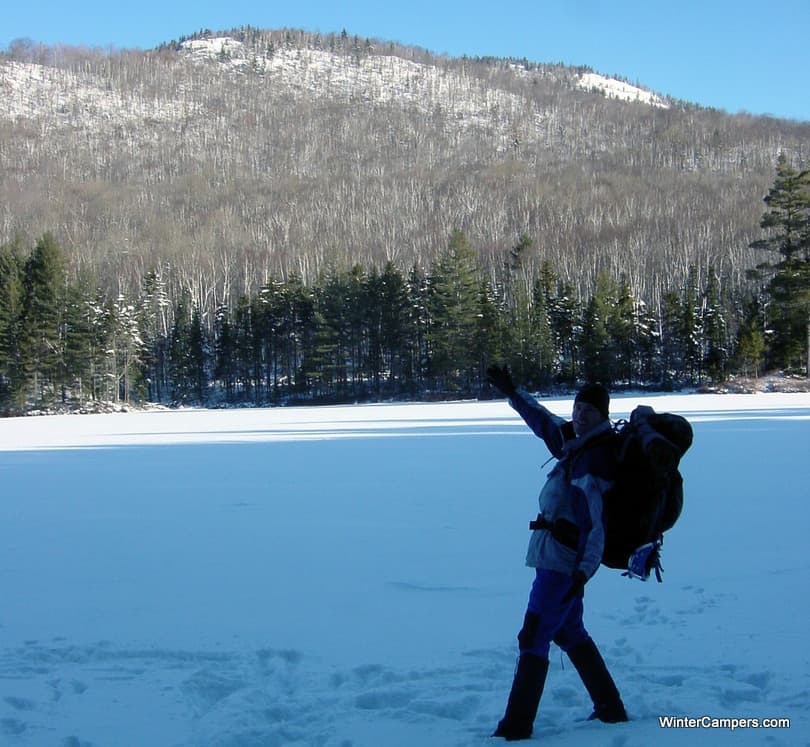 Following this quick breakfast, we snowshoed out the Lizard Pond trail to our cars and searched for a convenient diner for a well-earned second breakfast. 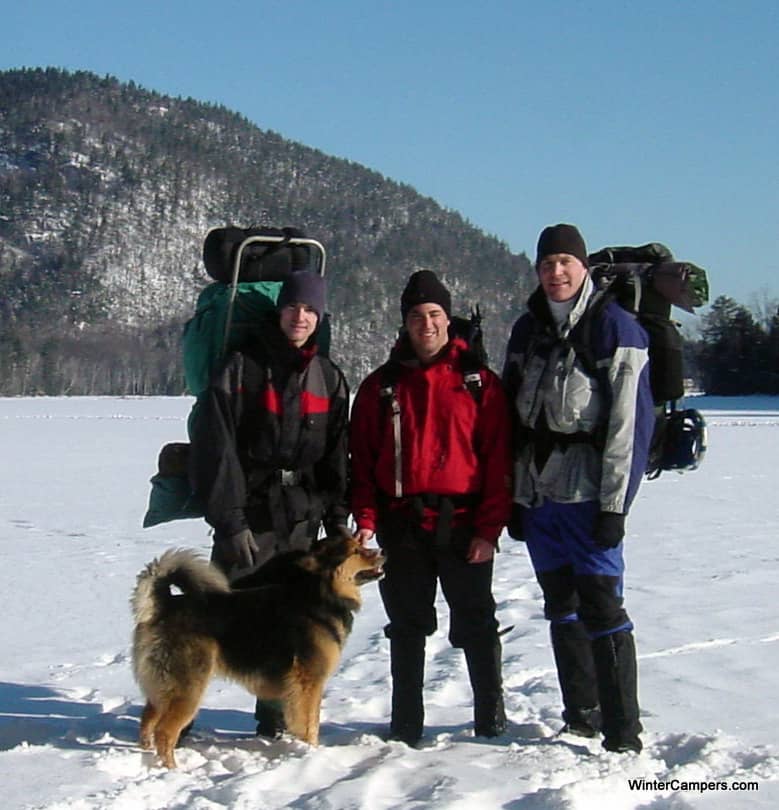